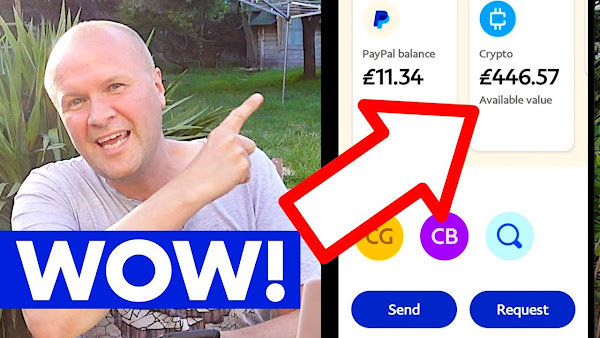 If you're scared of buying Bitcoin TRY THIS

hello I’m neil welcome back to the channel
this is the dad delivers vlog where I try something new every day and six weeks ago today the thing that I tried new was to buy cryptocurrency for the very first time
and that launched this experiment I’m hoping to run through the year
I’m six weeks on I nearly stopped but I thought it's Sunday evening... it's a beautiful evening here in June, here in the UK
I’m gonna... I’m gonna keep going with this and the plan is to buy some cryptocurrency every week just to see what would happen
and I’m doing it using this...
this is my regular PayPal account where you can buy cryptocurrency and I’ll explain that as I go along
but it's... it's scary and it's quite a financial commitment which I can't really afford but the money is still there at the moment and I know that who knows what could happen to this
I could lose everything but it could pay off as well and being a greedy herbert like perhaps you might be I thought well I might make some money as well
but it's tricky while cryptocurrency looks like this
it looks like it's tanking and just going down
I’m thinking well buying while it's going down might be a good thing
so that's what we're testing
and it's... it's also difficult to bring you up to speed every week with how that's doing because I’m basically saying the same thing each week which is...
It’s worth less than what I bought in the first place
this is what is happening right now
this is just my regular PayPal app on my normal PayPal account
you can see this giant crypto button here
I think we... we must think this is because PayPal are quite keen for us to be trying out crypto on its service
this is week number six and my rule is this
I am spending 100 pounds every week
this is what I’ve spent so far just on Bitcoin
and after last week I have spent 510 pounds and five pence on cryptocurrency
let's see what it's worth now
up on screen now that 510 pounds and five pence is now worth £446.57
so I am down by 65 pounds
it's down at the moment but I’m gonna continue
I’m gonna hit this crypto button now and you have to forgive me because the PayPal app blanks out certain screens from the screen recording so if the resolution starts to look a bit weird it's because I’ve put in some other footage
so my £510 now looks like this £445
and I’ve bought two currencies last week
I bought Ethereum for the very first time
I bought 100 pounds of Ethereum which is now worth £83.92 so the ethereum has really taken a hit in the last seven days
wow that has gone down by just under 20 pounds that means it's dropped by 20% in the last week
should we go into ethereum
let's see what's happened there
ethereum is down by what about 15% in the last week
it's really dropped look at that
Let's go back to Bitcoin
my 408 pounds and 4 pence of Bitcoin as you can see is now worth 360 pounds 84
so that has lost about 48 pounds as well
if I go into Bitcoin...
Bitcoin is down on the week by 5%
so this is good because this means we go back to the original rule
the rule that I play every week is that if Bitcoin goes down then I’ll buy some more Bitcoin
if Bitcoin goes up in the week then I will try some other cryptocurrency
that's why I bought ethereum last week
it's down which can mean only one thing... it's time to buy some more Bitcoin!
so let's... let's hit the buy button and then I will type in 100 pounds and one pence because the one pence puts me over the limit for the fees
the fees for PayPal drop slightly if I go one penny over 100 pounds
and then I’ll click buy Bitcoin
it's telling me I’m going to buy 0.00437 Bitcoin with a transaction fee of 2 pounds so I’ll pay 102 pounds and one pence
let's click agree and buy there you go you purchased 0.0043758 Bitcoin
so my Bitcoin is now worth £459 after I’ve spent overall £510 and five pence
if I move back to the crypto screen it's got what everything's worth now
so I’ve spent 612 pounds and six pence and that's 612 pounds in cryptocurrency is worth 543 pounds 46 pence
how long can I keep this going for
what cryptocurrency would you choose
because as we know the best financial advice comes from youtube comments
but what would you do if you were in my situation
would you keep going with this
is anyone out there watching this experiment
I don't know but say hi if you are and if you want to know what my cryptocurrency is worth right now it's right here in this playlist on screen
that is what it's worth right now
I’ll see you next week
can you please help my daddy get 10000 subscribers just click on his face thanks bye!
alright this is gonna be the proper one right?

Previous post...
How to RENEW UK PASSPORT on MOBILE