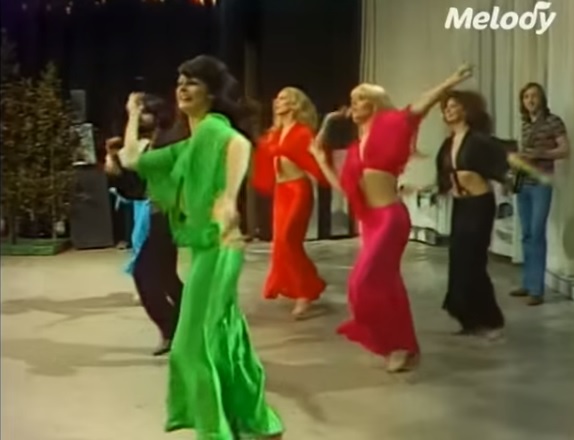 At school, my mate Rob and I would hilariously break into this tune, any excuse, any given moment.

If you don't know the bit from Police Academy, it's okay, I won't explain it here.

And because it was 100 years ago, it was impossible to get a recording of it anywhere.

Now it's one of the tunes I've spent way to long tracking down where it's come from
(the others include Go West, and Take On Me) - they've got surprising versions behind them.

So here's my little shrine to "El Bimbo".

First, feast your eyes on this! Bimbo Jet from 1974

But in the movie credits, the tune is "Written by Claude Ganem and Performed by Jean-Marc Dompierre and his Orchestra"

But all of this might be a little unfair -- there's controversy online over whether this guy wrote the thing - the Afghan performer Ahmad Zahir. (It all depends if you believe the date of his album "Lylee" is 1971 or 1977...) Either way...

Translation:
I'm left alone, alone
(literally: I became alone, alone)
I'm left relieved of any chaos
(literally: I got/became relieved from all this riot)
So much i took this pain that
(literally: so much I drank my heart's blood that
(it's a kind of a proverb in middle east speakers for expressing being in pain or bearing the pain like: khon-e dil/khon-e jigar))
I started to develop like a flower bud
(literally: I blossomed like a newborn flower (a red flower from the blood been drunk))

The cage is open, Fly O bird of my heart
(imagination)(literally: the cage doors are open--o bird of my heart fly (imagination))
There are lots of flowers in this flower field (rose garden)
but I'm in love with my privacy
(literally: the flower field is full of flower - I love the privacy)
I'm confidant to my own secrets, Go tell musicians
(literally: myself am confidant to my own secrets, discuss with musicians or tell the musicians)


All my fave things from the web are here...

Previous post...
How to turn back time on a recalled Volkswagen #BritishDadStuff 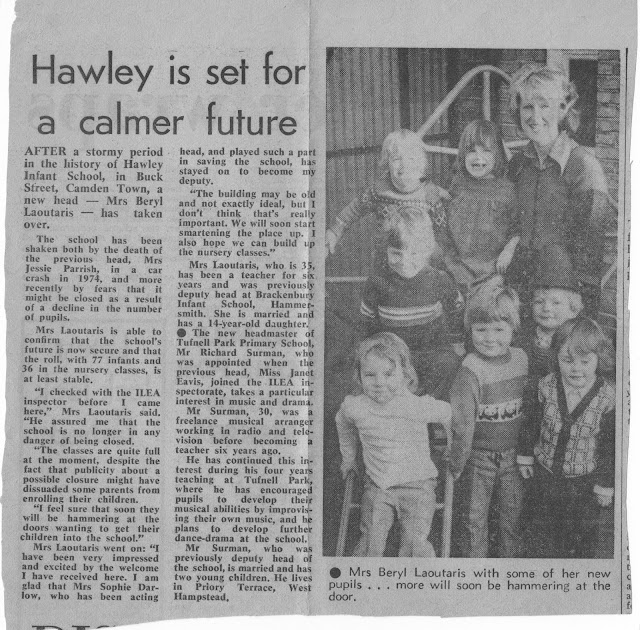 And I was there in the late seventies.

Front row, in the middle of that picture - that was my first ever day at school.

Someone got in touch after my Gospel Oak post last month and told me it's moving to make way for a new Camden Town Underground Station
(brilliant article about the history of that on London Reconnections here).

But it's brought back loads of memories:

I'm going to pass these on, but putting them here so my own kids - who are the same age now as I was - can get an idea of what Infant School was like.

In that first reception class, pictured above, Mum delighted telling us how she picked me up and the teacher looked grim. I'd painted a very special large new stuffed donkey that had been brought back from Spain, completely purple. 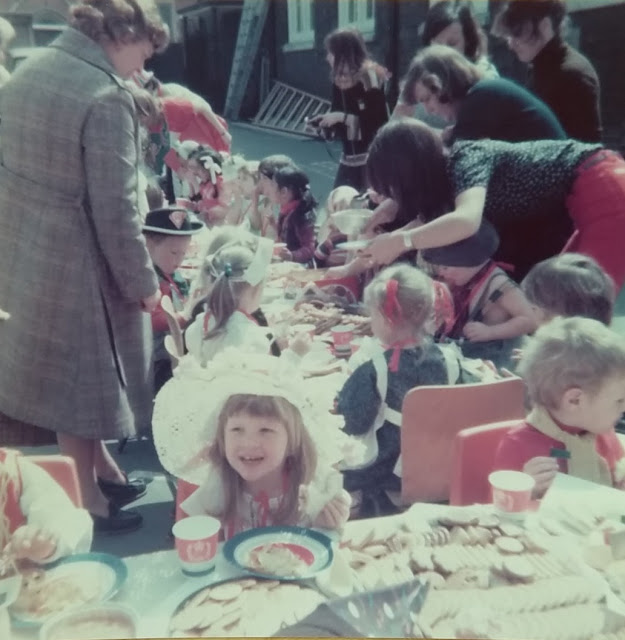 Raymond did a trick on me.
You were only allowed one plastic beaker of water at lunchtime.
(Today's Infant School water bottles mock all parents from the Seventies).
Raymond said "I bet you cant drink it faster than me"
I gulped mine down.
"Haha". He revealed his cup still full.
"I made you drink all your water..."

Also at lunchtime, in the main hall, Mrs Rose made me eat my rice pudding, and I was sick.
Literally sick on the floor.
I never forgot Mrs Rose. 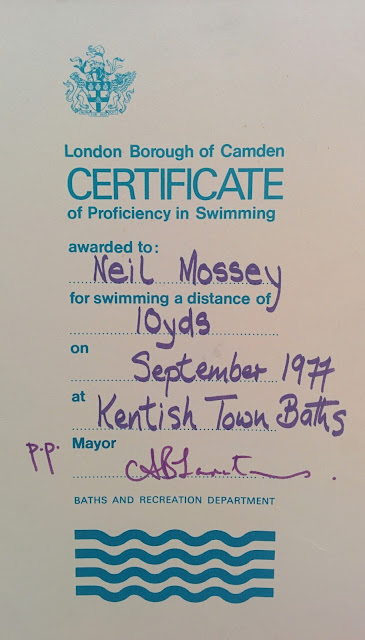 This is my swimming certificate.
I remember the light blue ILEA bus that took us to the Kentish Town Swimming Baths, and "drunk Bill" who was one of the swimming guards/teachers (ahh.. See also - I Survived the 1970's, where's my medal?).
And spotted only recently that The Mayor of Camden did not sign it.

I asked the current Mayor if I could swim 10 yards in front of her to get it signed on twitter, but guess she is very busy with Mayor of Camden business.

By the way, we used to travel there by Inner London Education Authority bus which looked like these.


William Beverley was in my class, and told me about "Santa" at age 6. 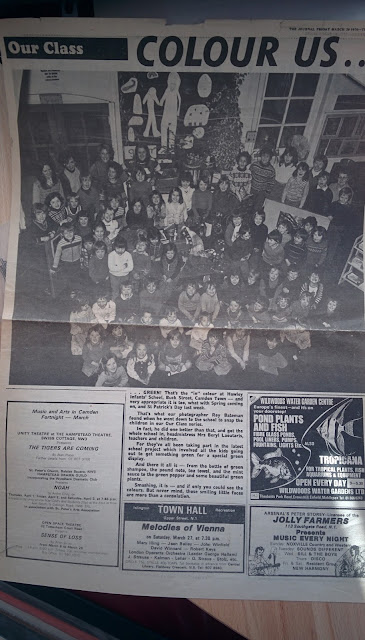 St. Patricks Day 1976 - Friday 26 March 1976 - article in the Camden Journal (before it was the New Journal) I'm second row back from the front, on the right 3rd in, like my own son in school photos, facing completely the wrong way. 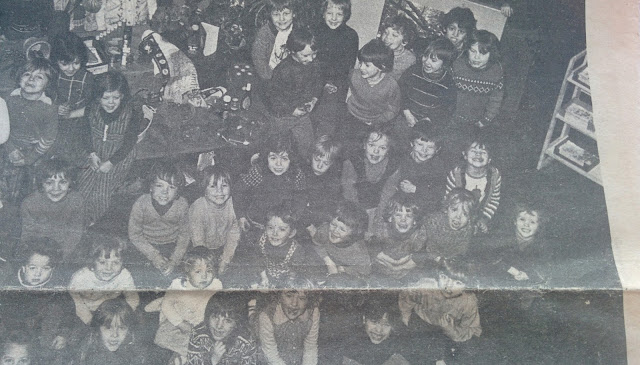 I really remember a long conversation between the Music teacher bearded man and Miss Hammond about what they were going to teach us to sing to Mrs Laoutaris for her leaving (to be succeeded by Miss Hammond as Headmistress) - he really wanted us to sing "Somewhere Over The Rainbow" but Miss Hammond thought that would be too difficult to get us to learn in time.

And I remember a story from Miss Hammond's class - about TickyTickyTempo-No-Sah-Rembo, Charry-Barry-Ruchie-Pip-Perry-Pembo.
Man, decades on, how is that still in my head. 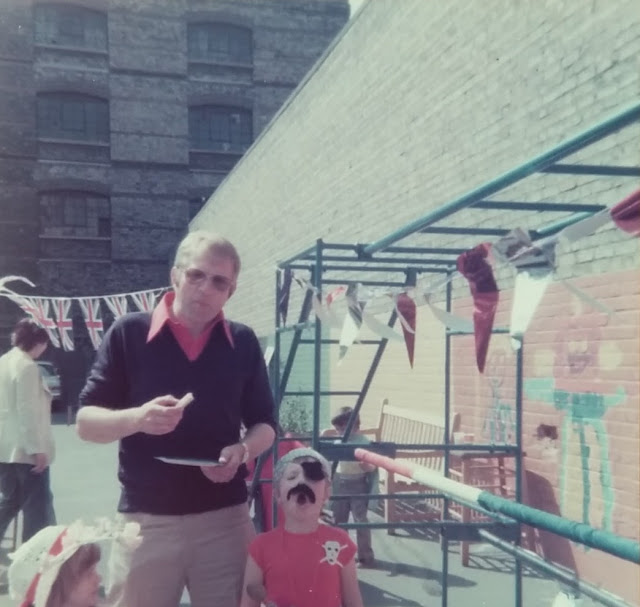 Playground stuff:
I used to play "CHiPs" on the concrete slope with my friends in 1979.

There was a toilet block in the playground, with a defunct steel box on the wall that my friends and I pretended dispensed bananas.
It was all the entertainment, or playground equipment, we needed.

The playground frame was blue.
With concrete underneath.
See also, Living in Lulworth

Queen's Silver Jubilee 1977
All the parents brought food for the party table in the playground, and Raymond's mum brought some Marmalade on bread. 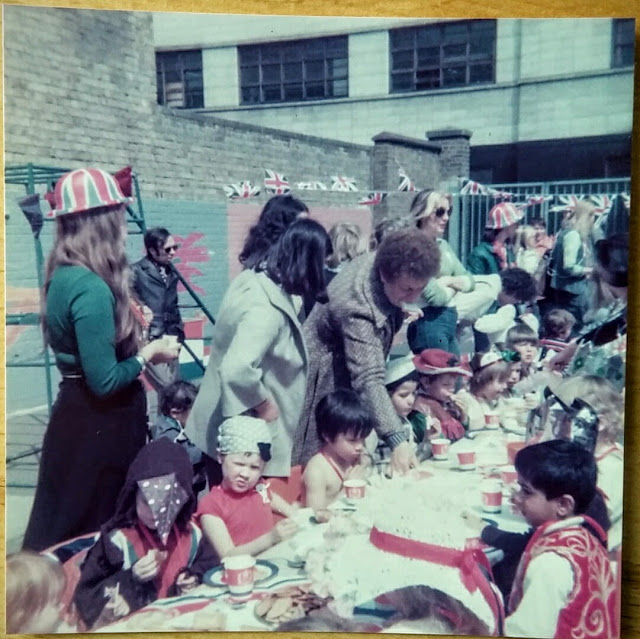 We were supposed to get a Jubilee coin, but got a plastic mirror with red ribbon with a British Flag sticker on the back, and were told "the Bank had run out of coins". (Reading that article at the top, I'm not sure maybe they could afford it).

(One of the "Great British mirrors")

There were a few times that I kissed Sarah Goff behind the bins that used to be next to where the nice new gates are now (just over my shoulder - the gap has been bricked up to stop that kind of thing now). 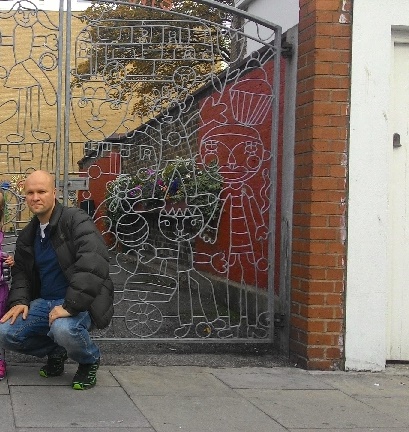 My best friend Michael Holland left in the middle year. It really hit me, and thought about it way too much afterwards.
It only came back now when my own 6 year-old son's best friend Teddy left his Infant school too.

Headmistress stuff:
Mrs Laoutaris tried telling my sister and I that it was wrong that Dad didn't take us into the school gate. We used to get out and walk in ourselves. We said, "it's okay, he trusts us".
(The 1970s were safe, right?)

I'm not sure it was Mrs. Laoutaris, but a lady spent a whole assembly explaining why it was important that Israel won the Eurovision Song Contest for the first time in 1978.
The whole assembly. 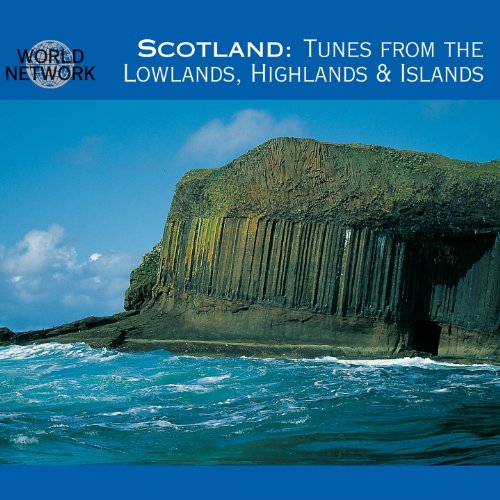 
I had a really happy time there, but there was one thing that terrified me.
We watched TV programmes like "Look and Read" in the room at the end of the hall. 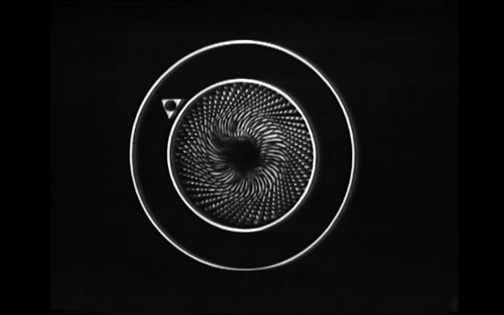 I remember - really vividly the black and white swirling countdown, with spooky sinister music.
By accident (looking for ILEA bus pictures) I tracked it down - it was a special ILEA TV channel and used before every programme played on the channel.

It's at the start of this video...


I remember using the orange folders with cards to put together sentences.

And I remember us all walking down to the bottom of Camden High Street once a week to the Library, near Mornington Crescent, for story time.


My guide to Understanding Your British Dad is coming together here

Previous post...
Draw all over your paperwork. Its the best way to get a refund out of South West Trains and other UK monopolies. #BritishDadStuff

Subscribe by email - send me your address, here
Posted by Neil Mossey at 12:10 No comments: 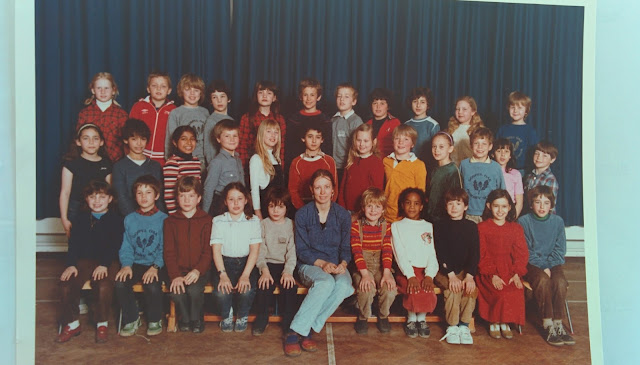 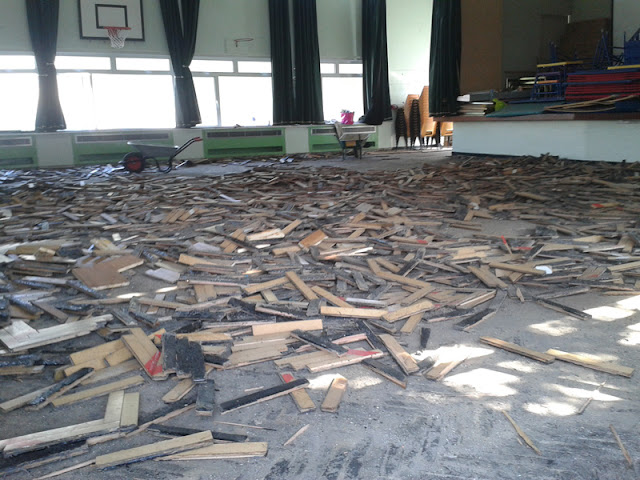 Get these posts daily by email. And thanks for subscribing, it helps me keep this blog going...
Posted by Neil Mossey at 20:45 1 comment: