HOW TO ENGRAVE A LACiE HARD DRIVE 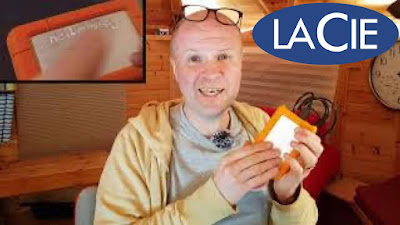 Follow along in real time to see if I permanently damage the delicate hard drive mechanism inside
(Spoiler: I don't, this video is stored on it),
and try out some engraving techniques to stop the engraver sliding all over its metal case.

HOW TO ENGRAVE A LACiE HARD DRIVE

Hello welcome back to the happy hut my name is Neil Mossey, and the way that I'm going to make Britain a bit better today in this video is to mark my property

I'm gonna write my name on my precious LaCie hard drives - look I wrote the phone number on my LaCie, it's completely rubbed off... that's my daughter, stuck that on

I think that might get peeled off and and this is the fear isn't it?

We don't put our name on stuff because we think that if it is stolen then then they'll also have our personal contact details as well as the thing they've nicked
But if they've nicked the thing, that thing's got all my life details on anyway so I might as well give someone the chance to do the right thing and to try to return it.

And when I've lost stuff, stuff has pretty much managed to get back to me because I've written my name on it like a six-year-old and I'm gonna do that today
I'm gonna actually write it like a six year old because I'm not an expert engraver!

I don't know, maybe the vibrations might somehow destroy the hard drive mechanism or maybe I'll dig too deep in the hard drive and ruin it that way
By the way, this thing here is like a little strip of velcro that I've put on so that I keep the cable with the drive because I can never find that - I've sort of tucked it into the bumper there

You know I need to put this disclaimer as well - I call them LaCies (Lacey's)
I know it pronounced lassie but they're LaCies!

And if that irritates you I apologize but I'm gonna engrave my LaCies now!
So I've made a engraving video before and I'll put a link to it in the in the corner there if you click on the "i"
These aren't exciting videos!

I'm just sharing my journey along the way - if it helps someone then that's good
I hope it does, but today we're going to engrave the LaCie and the and the MacBook Pro
I'll start with I start with the LaCie

Now I've chosen the smallest ball engraver - I learnt this last time - if I write my name on the drive first, and then do it sideways I think - because I don't think I'm going to get it all in that way

I do it nice and big and this is just to guide my lettering as I go, and I'm putting my Twitter handle on so I hope that will help someone return it to me - and I'll put my phone number down here but I'm not quite ready yet to share my my phone number with the world - but I'll show you how it goes with the with the name

That's a problem because the ball is so small it just skipped all over the surface
It's not given a very clean engraving, so I wonder if I should use the bigger one?

But my fear with using the bigger ball on here is that it will just go straight through and destroy the the hard drive and I'm not doing it on the side I mean the side would be stronger but it's hidden and I just want someone, if you find it on the street or on a train carriage or toilets that they'd be able to instantly see where they can get it back to me

So you hold down the clutch and can turn the spindle that holds the thing, and then you can put it in like that... and do it up.
If you don't hold that down the thing just spins around it doesn't do anything
There we go, so that's it now
Oh this is the big one - going in
[ENGRAVING NOISE]

I just don't want to go too deep - that's why I want to do this on camera so that you can learn from my mistakes.
Here we go.
[ENGRAVING NOISE]

That's about as deep as I wanna get
[ENGRAVING NOISE]

Right yeah you really do need the bigger needle to do this.
[ENGRAVING NOISE]

Oh and what seems to be working is if you just hold it in place and not move it very quickly - just hold the engraver very gently and move it very slowly - that seems to etch the letter better than by digging deep and writing quickly, even though everything in my brain is saying "do this quickly!" because you're gonna destroy the Lacie!

And I had a bit of a scare before Christmas I'm working with a professional video editor - someone who actually does this for a living - and he lost a precious drive!
A drive fell out of his bag and it was out in the world for about two weeks.

It had the name and phone number written on to it but it's easy to remove
I've got pretty much my life's work on here - I've got it backed up, I think - over some other hard drives

Keep thinking that's the off button!
It's not.

So I'm gonna try and blow them off but I'm... I'm pleased with that
Now I think I'd want to dig deeper just to make sure that it doesn't just rub off but the vibrations of this - I'm really worried that it's going to damage the thing inside

Probably shouldn't be breathing it in either
Ahh, the things we do for our stuff and property

I can plug this in now to my MacBook Pro to make sure that it still works
So, moment of truth... I'm on the other camera now

And plug it in - does the Lacie appear?
YES!

There it is
Shall I double-click on it?
There you go

It looks like I didn't destroy my Lacie - I clearly didn't dig deep enough with my name.
Oh, that's awesome.
What precious objects of yours would you engrave?

Maybe I could do them here on the channel!
Because I seem to get better each time I do this

Why not let me know that you reached this point by hitting the thumbs up or even better if you hit subscribe it helps take us closer to 1000 subscribers, when YouTube starts to pay us for these videos.

I'll take these off - and thanks for your comments and I'll see you on the next "Make Britain a bit better"... vlog.
Can you please help my daddy get 1000 subscribers just click on his face.
Thanks bye! How's that?