How to fix broken glass shower door... will it stay up? 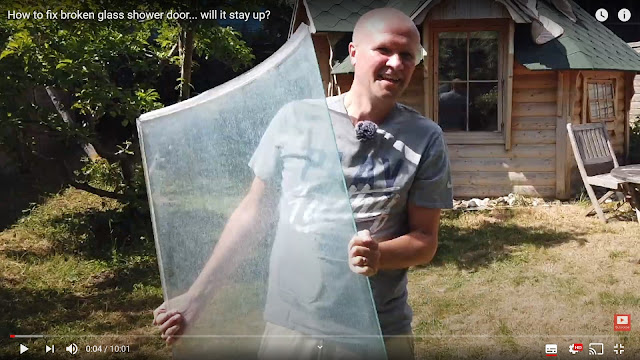 How to fix broken glass shower door... will it stay up?

TRANSCRIPT: (CLICK PLAY ON THE VIDEO ABOVE)
[Music]
Hello welcome back to the happy Hut, I'm Neil.
Usually I'm a tightwad dad trying to be happy with what we've already got like those words on the screen say - but we're in the middle of the great shutdown of 2020, so I'm trying to do something new everyday that I haven't done before.

And today is great because I get to combine the two of those.
I'm gonna try and fix this - it's a shower door - it fell off
The global lockdown is taking its toll on our house

I don't think we wash ourselves enough to clap out an entire glass shower door, but we have, and our house is like "Nope! You've been here plenty long. You need to spend some cash."

So I'm gonna try and put this back together again
I'm gonna show you how I fix or fit the glass shower door - curved one - back onto the metal frame, and how to glue it back on

I'm gonna do it in real time
This will either be a really good how-to, or it will be a lesson from history for how not to do it.
So the first thing I'm gonna do is clean it
It's absolutely not an essential step and you can probably guess this isn't my idea.
Basically got everything from under the kitchen cupboard to knock off about five years worth of scum
[Music]

Let's go back now to the scene of the crime
Hello this is our bathroom, welcome
I don't know what is going on with those.

They're mine.
This is the collapse house shower frame that I'm going to glue the door back on - I think I better pull the camera a bit closer
It's got some bits of the glue inside

Now the house is falling apart very very slowly
I can usually hide most of that from the family but this one is just a little bit too obvious
It's like all home improvement and DIY is it's just hiding stuff, but my house is giving me away one room at a time.

I can't keep up!
And now it's the part that I won't lie to you - it's the bit that scares me the most
The glue gun bit.

This is the glue that I'm using it's called Stixall that's got some kind of good pun action going there.
"Stixall extreme power!"

In the article on this ehow article I'm following, it calls it caulking adhesive, and if you put caulking adhesive into Amazon, you should get hundreds and hundreds of tubes that look like this
This sort of looks like it does the job

It says it's strong but what sold it for me it was this graphic here "even sticks under water" - so surely this, this has to be the one

I'll put the link in the description but you might want to do your own independent research rather than my just looking for the one with the coolest graphics
I think I could have bought this from a pound shop but I've tried to reassure myself by spending five times that six times that, so this should do the job

First task is, I've got to get into the thing
So I've gotta cut it open

Also it won't show up the mold like all the other white sealant that I've put up in here over the years
I've got a second camera here, now the joy of this is that I want to put enough into the metal frame to hold it but not too much glue to ooze out and go all over the door, but I guess I can wipe that off so I might put more than, than not

It's gonna really ooze out, and I'll just clean it afterwards I guess, but I'm sort of filling up the gap by about a third if you think of it like a trench - so filling it up a third of a way
The hardest part is just squeezing it out it's a bit tougher than I thought because it's such a small hole on the end of the caulking adhesive tube

Bizarrely it doesn't look like it's enough.
The other problem we've got is there's a lot of play within the groove, so that the the glass door can move around a lot

I don't think it's gonna hold
I don't think there's enough glue in there, so I'm gonna put a load more in the top

Because I put loads of glue - I can't say the word adhesive - adhesive - because I put so much adhesive into the the top... that's a good move... but it obviously takes a lot longer to dry
I'm just gonna leave it now because I think me holding it actually wobbles it, and that probably isn't helping the sticking process

I've got a towel wedged under on the far side just to give it that extra give
This is what it looks like two days later - and I'm really pleased that the shower door is fixed!
It is completely solid and the glue is completely cured, so all I need to do now is to start scraping the excess off

If I'm probably doing it again, I would probably work out a way somehow to put some masking tape on?
And I don't know, work out the depth of the frame so that I could masking tape off the rest of it - but I think even then I'd have to still be scraping

I'm just really pleased that I've got a door back on and now we haven't got all the shower water going into the floor causing yet another building problem for me to sort out
And somehow, I managed to get it on my face as well
I hope this video helps - you could live vicariously through me

If the door stays up I'll keep it in the description

Why not leave a comment say hi or hit the thumbs up button and help someone else with a curved glass shower door and if you're feeling even kinder why not hit the subscribe button I'm trying to get to 10,000 subscribers I don't think I'll ever get there but I'll be continuing to make this quality content and thanks for watching good luck with your shower door!

Previous post...
How to stop procrastinating... Neil Mossey | Nanochunk is your FRIEND! Make Your Stuff Now