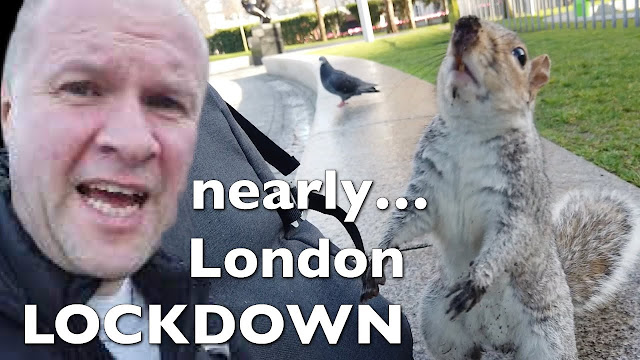 Just before The Great Shutdown of 2020, I had to walk from Waterloo Station in London, through the South Bank past the London Eye, over Westminster Bridge, past Big Ben, Houses of Parliament, Parliament Square, Westminster Abbey down Victoria Street (the most boring street in London) to Victoria Station.

So I filmed the journey, in real-time from my POV on my DJI Osmo Pocket camera.

The tourists had already gone, the South Bank was silent, the London Eye was empty and Westminster Bridge was clear.

I've put all these videos on a playlist: https://www.youtube.com/playlist?list=PLtZM4-pHDwPmhVv2KuqmQcpv58ehRqhFk

What, you don't like the peel?!
You're like my kids.
Bit more?
Oi - get off!
Okay so this is the walkway that's opened fairly recently
Just show you what it looks like.
[MUSIC]

This bridge used to go straight through the Shell Centre, but now goes down
Between the 2 new buildings
[MUSIC]

There's Royal Festival Hall over there
Hope you can see that
Here's what's left of the Shell Centre.
The upstream building.
[MUSIC]

So what I'm gonna do, I'm gonna walk from here to Victoria
And I'll see if I can keep the camera running.

So we're not on a lockdown yet but it feels like that's what's gonna happen by the time you watch this video.
Obviously you'll know what happened next.

But we don't know what's gonna happen
What's interesting er... slash eerie... is that this is quite a big tourist spot, and there's literally no one here.
There is literally no one around.
It's fairly early - oh hello - squirrel

Bet you're starving, aren't you.
You're starving because all the tourists would feed you.
Shall I give you a bit of apple?
Come over here. Okay.
Don't knock my camera over.
[MUSIC]

You're brave aren't you!
[MUSIC]

You don't like the peel?
You're like my kids!
There you go. Bit more?
Oi gettof! Here you go.
You don't want the apple? Let's go.

That's how desperate things are - being mugged by squirrels
Anyway oh, seriously I'm gonna have to disinfect my bag now.

Erm, what I was gonna say was look at this - this is the London Eye - the big wheel on the south bank and it's turning round but no one's on it
so I don't know if that means it's closed
but if it's closed, it's nice of them to give it a spin isn't it
it's definitely moving isn't it

No one on it it
Looks like it's moving because they're doing maintenance on it
...like removing panels and cleaning stuff
[MUSIC]

There's County Hall... and Shrek's adventure
now Shrek's adventure was the home of the London County Council from the 1920s to 1986 and sealife was the seat of London government for most of the 20th century
Also it was home to the highly successful talk show Terry and Gaby on Channel 5 in the early 2000s
[MUSIC]

I don't know what those things are
I don't think you can see - just above that part of the houses of Parliament they've got like boxes on scaffolding
I'll try and cut closer to those in the edit
Wonder what they are
This is a great walking tour isn't it?
it's just an hour of me going "wonder what that is?"
[MUSIC]

I'll call it the comment tour you can leave comments -- leave fake facts in the comments
That'd be nice.
[MUSIC]

Some barriers on the bridge to stop the virus getting on
Hey it it almost - I'm not saying it's quiet - but it almost is like that scene on "28 Days Later"
Just need a bus inexplicably on its side and it would complete the feel at the moment
Some buses - will go on some of those later.
[MUSIC]

I never know if I should point the camera at me, or rather aggressively ahead of me
I don't think you wanna be looking at me though.
Portcullis House
Oh man, I really want an electric scooter
But I know I'd look a bit of a div on one.

But I don't care. I wanna be on a scooter.
[MUSIC]

Oh, you can see the clock face - I'll try and zoom in on it in the edit
it looks beautiful - it's so colourful
[MUSIC]

Very magnanimous of the MPs to provide traffic lights for themselves
I think I want to go over there which is where Victoria is - so (SINGS) do I go left now or do I go right?
Something for the "Me Too!" fans there - that's "Me Too!" the Cbeebies series, not the movement to make the world better

Cut across Parliament Square
Oh there' Whitehall where Matt LeBlanc raced a car - got into trouble with the newspapers - the newspapers that govern us.
[MUSIC]

There's Churchill - I've never been this close to the Churchill statue
I grew up in London and I haven't actually - I don't think I've ever walked across Parliament Square - I'm glad that I'm capturing this on video
So there's David Lloyd George and then erm...
I'm just reading what's on the things - there's Jan Christian Smuts - Viscount Palmerston, star of my "A" Level history.
That I've forgotten now.

Oh, that's just-- there's a lot of cyclists around, which is good.
Oh there's another statute to Gandhi, that's good.

So the other statute to Gandhi I did that on my other tour, from the top of the 168 bus - I'll put that in the description
but that's another one and - I think he's sitting down all in a meditative pose in-- near Russell Square.
Mandela!

freedom fighter and subject of my favorite Eddie Grant songs
there we go now I'm gonna cross over
Feel I have to run because the cyclists do like to go through the red lights somewhat in London.
it's a tradition

Oh look - it's another hole of... "Hole of London"
I've got another video where I've put together lots of holes in London.
While they're springing up - here's one in Victoria Street, before a new building goes up.
I'm so sorry I'm gonna have to stop the video there this is a very very boring street

[MUSIC]
And for sake of completion of this video here's Victoria!
Oh, that's Hamilton
There's Victoria over there!
Run! Like a cyclist!

I hope you enjoyed this little walking tour with its completely accurate facts along the way
if you reached this point of the video why not indulge me with a thumbs up so that we know that someone reached this point that'll be really cool and if you're feeling even kinder maybe even a hit of the subscribe button
that really helps me anyway, thanks for watching I'll see you on the next walking tour

That was close!
Can you please help my daddy get 1000 subscribers just click on his face
thanks bye! how's that?