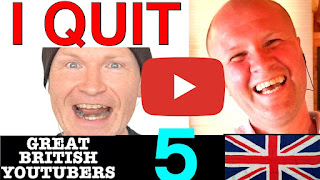 "I QUIT YOUTUBE!" - it's something we've all heard, but is it true?
And how do you keep going?
Gordon Laing has 160k subscribers and, incredibly, uploading to YouTube since 2006.
I'm a Development Producer helping as many people as possible get ideas out of their heads to make more people happy. I created GREAT BRITISH YOUTUBERS to help you get started and keep your YouTube channel going.
I QUIT YOUTUBE! Gordon Laing: GREAT BRITISH YOUTUBERS with Neil Mossey PODCAST 005


I quit!
And if this were a youtube video... I should have made a video about it!
And you would do "I" and in capital letters QUIT. QUIT.
Why I quit
I've seen videos where people say "why I quit" and they didn't even quit.
It's they-- they talked about why they might quit or why somebody like them might have quitted or why they thought about quitting but they didn't quit!
[MUSIC]
THIS IS THE TRANSCRIPT - CLICK PLAY ON THE VIDEO ABOVE!