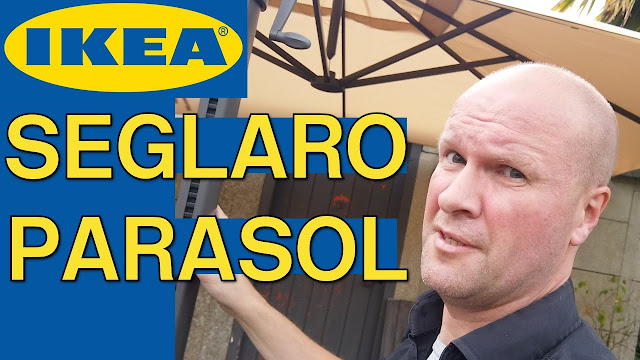 This is the IKEA SEGLARO... SEGLARÖ a beige tilting patio parasol.
But what is it like?
We really wanted to know and couldn't see much online, so hope this gives you some kind of idea of the size and scale.

Hello I'm Neil, welcome back to the tightwad dad vlog - it's the place where we try to be happy with what we've already got, like you can see with those words on the screen there.
And we've failed spectacularly at that today because we went and bought this!

It's an Ikea parasol it's called SEGLARO - with a funny thing over the "o".
I don't know what it is.

I think it's probably because we've just come out of lockdown?
We just needed to see other people, spending stuff [LAUGHS] while we spent stuff ourselves.
We went to the big blue and yellow warehouse...

I've been making quite a few videos about IKEA stuff lately, but they do really well on the views which is kind of why I do them.
Maybe I should call it IKEA DAD... or is it IKEADAD?
Anyway we didn't know what the SEGLARO would look like in real life, so we had to go there to see it.

I thought if I put it on video for you - put up what it's like to actually put up, then you'd have a better idea maybe if it's something that you're looking for.
It's enormous, it is absolutely huge, I haven't even put ours up yet.

Oh my goodness and this is in a warehouse - it looked big there.
Let's go and show you what, what it looks like.
So this is how the IKEA Seglaro Sun parasol looks, but if like us you were wondering what the box is like, this is what it's like!

It's a beast.
So this box is two-and-a-half metres long.
It's half a tape measure.

It was a bit of a job - we don't have a huge car and it was pretty big but we didn't know if there would be extra bits.
We were glad it all came in the one box.
We decided not to go for the really super expensive base, so we can show you what that's like if you're trying to put it up without getting the really nice plastic base.
I've got a second camera up here... garage cam!
[Music]

Of course, it's the IKEA scissors!
This is what comes inside.
We've got the parasol bit, bit of cardboard bridge there, box of attachments.

Where do I start?!
Alright this is the base in this box.
Oh, the instructions are inside the, the bag with the parasol.

IKEA SEGLARÖ
Or Ikea.
I would like to be able to just say Ikea.
Oh by the way, it's the middle of summer.
I've managed to choose the day with torrential rain as well.
So first we build the base and put this on top of that bar.

You get four of these things, and they bolt into the base, key-- there's a key that stops it from spinning around.
So on the base you can see there's like a big hole as well as the four holes and you want to line that up with this big hole here
Let's put that down and on that hole you want this key -- like a, it's like a chock thing and that will stop the post from spinning around.

So put the bolt through the the key thing, this metal wire thing, and then that goes on the hole next to the large hole there.
And you can turn it with the allen key.

Do the other bolts just so you know that each of them have got a washer, so this chain thing that kind of acts as a washer already, and then you're given three washers for the other bolts.

So these are the concrete blocks that we're using for the base.
You might actually recognize them from the Buddy Bench in our home school fail video but we're going to try them out on the base here.

The hardest part is putting them down without scratching the base but I guess if we got the proper base the scratches wouldn't show so much - and our daughter's already painted one of them a nice grey already, so I guess we're going to paint the others different colours maybe?

Just so you know, on the the base panels themselves there are holes which are I reckon probably there so that you can maybe screw it down onto decking you wanted it screwed down permanently?

Now the next part is putting the main parasol, the main IKEA parasol pole over the pole on the base.
It looks like it fits just one way around
[Music]

It's huge!
The Seglaro is absolutely massive!
What we need to do now is to put the bolt in there just so that the parasol fixes to that stand.
There's a hole just there.

I can't get to it.
Oh nuts!
There you go I've already lost the allen key so I've had to use my own!
The-- I dropped the screw and it fell into that hole and in the process of getting it out I've somehow lost the allen key that came with the IKEA Seglaro.
Here's a tip that might save you some money, before I take this off, this could actually be your protective cover.

This could be... the thing that protects it from the weather.
So when you open your box don't tear off the, the plastic sheeting because it looks like a really great cover for the Seglaro, and it's free!

Look, the parasol is already marked from where it was packed next to the, the nut there.
Look it's left this really big oily mark - it's not great for a £125
Anyway let's put the handle on.

It screws on with this allen key.
There we go, so the handle's on now.
Supposed to push in this button to lift the handle up - maybe untie the strap that's here and that's stitched on so I don't have to worry about that, losing that, and then it says push this button here and lift up -- Wow there it goes!

Doing this one-handed while I'm holding the camera so you can probably see on the other camera...
Oh, am I clear of the table?
Yeah.
Oh there's the mark.
Up it goes.

Turn the handle I guess so that's this one here.
I can see it pulling up the cord in the middle there - you can see there's like a, a cord here and that's what pulls the whole thing up so just by turning this...
[Music]

It is massive!
So lock the key in the base here so it doesn't turn, you know the main post doesn't swivel and we turn this handle, and up it comes.
I'm doing this one-handed.
I'm not showing off I think it's just easy to use.

As you turn it pulls the cord that pulls up that thing that locks into that pole there.
So I've made another video about the Applaro table and if you, if you want to get some kind of sense of whether you know this parasol goes with this table, it pretty much covers the whole table and the people underneath.
[Music]

So hope this unboxing of the IKEA SEGLARÖ has helped.
If it has, why not hit the thumbs up button just to let me know that somebody reached this point of the video, and if you're feeling even kinder, why not hit the subscribe button down below.
We're trying to get to 10,000 subscribers.
I don't think is going to happen but if you click that button you take us one step closer so we really appreciate it and thanks for watching.


Previous post...
PODCAST MIC into an OSMO POCKET? NEEWER NW-700 with pre-amp, how does it sound? AUDIO TEST