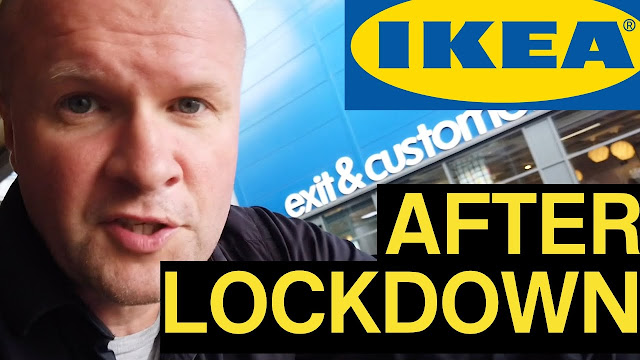 What are the displays like? Do they have hand sanitizer?
Are the toilets open?

What is IKEA like when it opens after the Covid shutdown of 2020?
Is there a queueing system in place and how long does it take to get in?
Trying to social distance with other Ikea shoppers...
Does IKEA still serve food, like the hotdogs and meatballs?

HOW TO ENGRAVE A MACBOOK PRO

TRANSCRIPT: (CLICK PLAY ON THE VIDEO ABOVE)
Hello, I'm Neil
I'm usually a Tightwad dad which means that we try to be happy with what we've already got - that's what the words on the screen say there.
This is probably not very tightwad daddy, but today I'm at... Ikea.
Ikea!

So we're here... and it's really empty.
And, they've closed the top, the top floor of the car park, so that, I guess it's for the queueing.

You're supposed to stay-- Well you're supposed to only be one... one adult and one child - it's sort of frowned upon to bring a child... whoops
So I split up with my wife and my son (LAUGHS) there's metaphor for you from IKEA there.
We're pretending to not be related.
Ohh, there's quite a queue.
Woah!

Then we found out why the top floor of the car park was closed
Yep there is a major queuing system in place
We went first thing on a normal weekday and this is what it looks like at around 10 o'clock in the morning
Sneak under!

I can smell everyone.

We queued for about 40 minutes then when you do get to go in, we really recommend you bring your own bags to carry around
Those famous reusable yellow bags that they hand out that the entrance obviously aren't there anymore and there's a single hand sanitizer dispenser which to me smelt a bit like cognac.

So the hand sanitizer-- smells like booze.
And it's disgusting.
Ah, it's lovely. It's like I'm going through IKEA stinking drunk.

This is our first time that we've gone anywhere for three months
It was weird being around other people and not, you know, in a supermarket.

Gotta say, people in here aren't quite down with the whole two metre thing
It's almost like three months practice wasn't quite enough?

Like in any regular theme park, there were things that were closed and taped off
It's the saddest sight... restaurant closed

We had this question though, which is, if the restaurant's closed... are the toilets open?
And, yeah, they are!

Toilets and the lifts were pretty much the only places where we saw hand sanitizer on the upper floor, so you might want to bring your own

Saw a woman just now, she did... Exactly what I would have done.
Because I feel like I should be wearing a facemask... so she's wearing this face mask and she goes up to a worker to ask them a question... she pulls the mask down to ask the question! I was like-- Touching my face now.

It is so quiet!
It was only meant to be a quick trip but we ended up there for over three hours
So the big question now is will there be anything for us to eat
So can you see down into the warehouse there?
Oh yeah we're going down there.
So we're gonna see now if the hotdogs and the ice cream are open.

Oohh Swedish Meatballs! So we've got a thing and some meatballs. Meatballs, and thing.
The check outs were exactly the same but with no queues whatsoever, so going early seemed to pay off for us.

Well, pay off's probably a bad phrase with the amount we spent
But we did want to spend more on those hot dogs so is that hot dog store still open?

It was! There it is! And again absolutely no queues.
There's no ice cream machine or unlimited fizzy drinks. Just cans for £1.20 which we didn't go for - but they do do the meatballs, though we decided to go for hot dogs this time.

It wasn't as bad as I thought it would be. You know, there's fewer people in the store, which is great. But they don't like distance -- that's not a cultural thing we seem to be doing in this country yet.

Thanks for coming on our journey with us and hope you got to shop vicariously through us on this video without spending hundreds of pounds or dollars... depending on where you are.

Where are you? We'd love to know - Leave us a comment!
If you've reached this point in the video, thanks for watching why not hit thumbs up if this has been at all helpful, and if you're feeling even kinder, why not hit the subscribe button, we're trying to get to 10000 subscribers, don't think that's ever gonna happen. It will! It, well maybe one day but if you did subscribe it takes us one step closer so thanks again and see you on the next video!
Can you please help my daddy get 10,000 subscribers. Just click in his face. Thanks bye! Alright, this is gonna be the proper one, right?