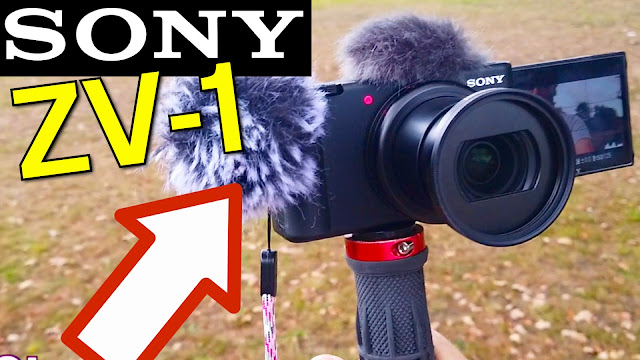 Does the SARAMONIC SR-XM1 work with a Sony ZV-1 camera? Yes, it does!
This is an audio test with audio samples for the Saramonic SRXM1 mini shotgun microphone with review and comparison vs the Sony ZV1 built-in microphone.

Hello I’m Neil, welcome back to the Happy Hut.
You have one question which is: Does the Saramonic SR-XM1, this microphone here, work with the Sony ZV1 or I’m British, ZV-1 which is the camera that you can see here.

There is a really simple answer to this question - it's yes because you're listening to me right now on the Saramonic SR-XM1.
I'm keeping my voice down a bit.

I feel a bit self-conscious so that might affect the audio levels, but look just to show you, I've got my Osmo Pocket here - this is what it looks like.
I’m still on the sound from the SR-XM1 by Saramonic.
I love this microphone - tilt it down.
It's a mini uh shotgun mic.
It is directional and I... I like that.

I’ve used this microphone with - when I first got it for my GoPro Hero 5 and then I’ve used it with this the-- the Osmo Pocket.
I think it's a really good microphone and I’m going to keep talking so that you can hear what it's like - just so you can get an audio test of the Saramonic SR-XM1 outdoors.
It's about 8:30 at night, so you can probably hear some some birds going to sleep and some some traffic going home. It's a Friday night.

In this video I’m going to try to put this microphone into a variety of say-- well I’m going to do two more settings.

We'll go indoors and you can hear what it's like in an indoor setting, in an environment that's not very forgiving for recording voices, and we'll do some walking around with the with the microphone.
Which is probably what you want to do with your beautiful Sony ZV 1.

The first thing I can do for you is to actually just take it out so you can compare how the Saramonic SRX M1 sounds against the the built-in microphone.
I’ve not done this before so I’m going to pull the microphone out and see what happens.
[SILENCE]

Now I had to restart the recording there because if you pull out the external microphone it does kill the audio so that there's no sound from the built-in microphone.
But what you can hear now - just point my Osmo at it.

What you can hear now is the in-built microphone for the Sony ZV-1.

I mean obviously I’ve bankrupted the family by getting the the ZV1 and if like me you're watching hundreds of these videos... meanwhile my kids are eating pasta until 2024 when we can afford food again.
This is what the Saramonic SR-XM1 looks like and I’ve got the the product showcase feature on and look at that it works!

Can you bend it truly 180 degrees?
And you can. It goes all the way around.
It's like a shock mount inside but that's what it looks like.

I think I’ve got it around the 19 mark, just so I’m not peaking too much, so I'm not hitting the red on those, those meters there, and I’m not treating the audio in the edit at all.
I am going to raise the levels of the in-built mic and the Saramonic SR-XM1 just to... to make them more balanced.

What we'll do now is, we'll go into there and we'll see how this sounds indoors.
This is how the Saramonic SR-XM1 sounds indoors.
And like I say the the Happy Hut isn't the best acoustic place to shoot videos.
Usually I prefer a lapel mic just to get the microphone closer to me but what I love about the Saramonic is that it is directional.

It is pretty much pointing towards me, so hopefully it's not getting too much reverb from around the room.
I can show you what it's like: if I tilt the microphone away from me so I’m just pointing it against the wall behind this camera.
This is how it sounds - you should be able to hear a difference.

Quite a marked difference I think.
But what's great is if you're vlogging with this you can flip the microphone around to point to yourself whenever you want to, and I’ll show you what it's like out and about next.
If you're interested in buying this there's a link in the description or even indeed the Sony ZV-1.
The links are all in the description if you buy there, Amazon shower pennies upon me, so thanks for clicking on there if you do buy it from those links.

Shall I pull the microphone out and you can compare this now to...
This is how the Sony ZV1 sounds with the in-built mic.
To me, the microphone on the ZV 1 sounds pretty good.
Leave a comment.  What do you think?
Do you like this?

I can't even get the words out.
It doesn't sit very elegantly with the SR-XM1.
I’m trying to get you a shot on my Osmo Pocket.
It can do it, but it's a bit of a stretch and I’m not really happy with the pressure being put on the ports there, for either the microphone or the USB cable, but that might be something that you might want to bear in mind.

That if you want to run power into your ZV-1 with the Saramonic SR-XM1, that is a bit of a tight fit and they are kind of jostling for position there.
I saw hundreds of videos about the Sony ZV1.
I just wanted to see as much stuff as possible of this camera.
It's gorgeous!
It's absolutely not a regret.

I’ve only been using it for a few days so I don't know if I am using all the settings correctly for the power, but my goodness the the battery does not last long at all.
I’ve got the camera set about a desk width back from me.

It's about 60cm, and I’ve got active stabilization on, even though I'm on a camera arm, I’ve left the stabilization on just because I forget to put it on and it looks terrible when I leave it off.
But the the cropping doesn't seem to be that bad.

It seems to be getting me in without it feeling like I'm filling the screen with my face!
But anyway this is an audio test you don't need to know any of this!
Let's go outside and maybe a slight change in time of day?
This is probably where the Saramonic SR-XM1 comes into its own with the Sony ZV 1 camera: out and about doing a bit of proper vlogging.
I’ve got active stabilization on, if you're interested, and I’m using a hand grip I'll show you in a moment.

I just had to remove a big blob of tack from it first before I could put it onto the camera.
And also it sort of looked like the Saramonic SR-XM1 didn't quite fit around the door flap of the 3.5mm jack on the Sony ZV 1 camera and that's not true at all because I can show you now it fits absolutely like a dream, and it can easily achieve that 90 degree angle around the door.
And probably go even more sharply in.

We've got a major motorway in the distance.
It's starting to rain and there's a very light wind, but this is what the built-in microphone...
Is it built-in or in-built microphone?
Leave a comment below - which do you prefer?

But anyway I’m going to do a bit more talking about-- this dog... the dog's about to attack me.
This is the Saramonic SR-XM1 and you can probably see on the other camera shot this is what it looks like, but I’ve also got some extra accessories.

I’ve got a fetching pink camo lanyard, my favorite hand grip and a lens adapter which is mainly for protection in case it takes a knock on the front, but anyway this is the Saramonic SRXM1.
And this is the Sony ZV-1 in-built internal microphone.
By the way my name's Neil.

I’m a development producer helping high achieving creators and performers to get ideas out of their heads and out here on YouTube, and I’m not a tech guy or a camera review guy but I’ve got quite a few Sony ZV1 videos coming up.

So if this video is helping you might want to hit the subscribe button to not miss out on those and every subscription really helps me, so thanks for being awesome.
So what do you think?
Those are my audio samples - my audio tests for the Saramonic SR-XM1.

I really don't like those big shotgun microphones and if you've got a small camera like the Sony ZV-1 or ZV1, I think being discreet and small in shape and size is a really good thing, no?
If you are enjoying this video, you might enjoy all my other Sony ZV 1 videos: they're on this playlist here which is on screen now and in the description.

All the links to the Saramonic SR-XM1 and even the Sony ZV1 are in the description.
If you if you buy them from those links, that really helps me financially.
I get a nice commission from Amazon which is tiny, but greatly appreciated.
And if you've reached this point in the video - you're still listening out to see if it's a microphone you like?

What do you think?
I’ve put all of my Sony ZV1 videos in this playlist here.
It should be on screen now or in the description.
I'm going to be testing out all kinds of accessories - budget accessories - for the Sony ZV 1.
If you subscribe that would be greatly appreciated.
You'll be taking me one step closer to 10000 subscribers.
A figure that I can only dream of, but you'll be taking me one step closer, so thank you.
You're awesome!
And I’ll see you on my next Sony ZV-1 or ZV 1 video, thanks for watching!