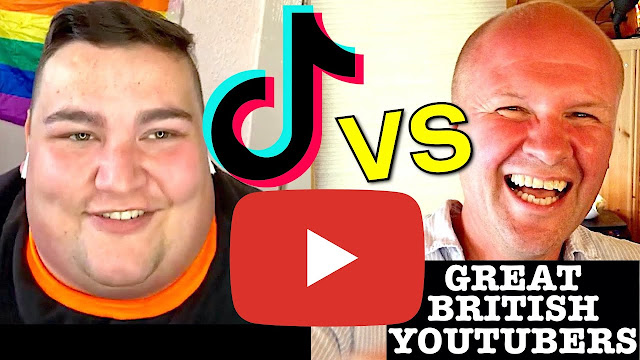 TikTok Vs YouTube?
Steven McKell has 2.3 million Tik Tok followers, 53 million TikTok video likes and around 400 million views. Steven also runs @Steven Mckell YouTube channel, so he is the best influencer and TikToker I know to learn about TikTok versus YouTube.

My name's Neil Mossey and I help high-achieving creators and performers to make more people happy. GREAT BRITISH YOUTUBERS PODCAST is to help you keep your YouTube channel going.

0:00 Great British YouTubers podcast with Neil Mossey and Tiktokker Steven McKell: YouTube vs TikTok
0:55 Steven McKell's Matilda Miss Trunchbull TikTok: How to make a viral Tik Tok video
1:55 Steven McKell TikTok with the most views: lip challenge.
3:48 How to get views on Tik Tok
3:50 Why is Tik Tok better than YouTube? TikTok versus YouTube
4:14 What's better TikTok or YouTube?
4:38 Differences between YouTube and Tik Tok platforms.

I've got some zzzz'ing going on here.
Sorry I think it's a fly, my bad, there you go!
[Music]
Steven Mckell!
You have--
Yeah!
2.2 million followers on TikTok
51.7 million likes
I, I don't know how many views how... how many views would that rack up?
I don't know it's something like 400 million, 500 million around that ballpark figure, which is like mad to me it's really it's insane.
I don't know I never thought I'd be able to kind of get that.

But not only that, you also have a YouTube channel, so you are the best Tik Toker I know to ask about the differences between TikTok and YouTube.
Before we get into any of that though, what is your favorite own Tik Tok video on your channel?
Oh that's the hard one!

If you ask a TikTokker this, this is hard.
I think, I think it's the one where I've done Miss Trunchbull.
I've done Matilda and pretended to be Miss Trunchbull and it got like, done really really well.
I think that's my favorite one because I think that really encompasses like my favourite childhood movie, it's acting, it's fun, people really resonated with it.

And so I like dressed up like Trunchbull, had like my hair slicked back and I had my suit on... my suit on-- my suit jacket on with like a belt and like these shorts and I was and I pretended to be the scene where she chucks Amanda Thripp over the fence - just before that?
And so I reenacted that scene with Miss Trunchbull and Amanda Thripp the little girl so it was very-- it was... I don't know what it was.

It was one of those things I was like I'm just going to film that today and we'll learn the lines and then film it and do it in like my way and it done... it done really well.
I was really proud of it and but there's a lot of videos that I'm proud of and it's really hard for me to pick one but I think that one really... that was another thing people knew me for at the end of last year.
They were like "oh you don't like-- you're like Miss Trunchbull!"
I'm like "Hehhh, I am... yes!" [LAUGHS]

And what's your video with the most views?
It's the lip challenge and it's got like, I think it's got like 34 million views or something which is madness.
It's got like 30 million views and it's basically me, this is how... this is how the Tik Tok algorithm works and how anyone can get big on it.
It was me putting like three like lipsticks like with lips, I was going to put one strip there one strip here much like... I... just like this!
It was this to the song and it was madness.

It was like the least effort you could put into a video and that done like... got the most views and everyone knew me as the, the boy... "Oh you're the guy that does lip challenges!" and I was like yeah, I know, and it's...
Even now it would be posted like every 6 months and it'd still get like 10 million views and I'm like "Why!" Why does this? Like, why do people love this?

But I think it's aesthetically like people love to watch those kind of makeup stuff.
Did I detect a slight eye roll when you gave that answer?
Are lip sync videos seen as perhaps a lesser art form?
The worst thing was it wasn't even lip sync.
It was me literally just going... [DOES LIP MOVES]
...to like smudge the lips - the lipstick - to make it look like I had like three colors of lips.

So like it wasn't even lip sync, so it's like even worse, but I think in the realm of lip syncing... so the app used to be called musical.ly, erm... which you know, we don't call it anymore and that... that traditionally was a lip syncing app.
That's how it was - It's how it got its notoriety.
However I kind've done original comedy back then and I've done lip syncs as well but original comedy and like dancing and like meme style content...

But I think now, although people that do lip sync still do very well and they can just sit in front of the camera and lip sync a song and get 10 million views... I'm not jealous... um but no, that I think that now there's a higher standard now.
Now it's a platform with... you oh there's there's so much in there and I think lip syncing is maybe seen as something that's not something like they want to push like...
"It's a lip syncing app!" because it's not now.

It used to be but now it's more like you know, if you want to really be like big on the platform and really want to be there for a long longevity you've got to kind of... you've got to be able to reinvent yourself, I think.
And you have a YouTube channel and a TikTok channel?
Yes.
Why is Tik Tok better than YouTube?
So I think TikTok's better than YouTube because, one, it's like it's shorter media.

So it's short form media, whereas you know YouTube's long form media, traditionally.
And I think with Tik Tok it's it's easy to get involved in videos or see trends that you are um you can relate to, that you can erm, that you feel like you want to do.
The thing about YouTube is that you watch a video and you're like that's great and they make me laugh, it's fun and you think I'd love to do YouTube!

However then you have to get a camera, lights, edit and it's really hard to be a YouTuber really really hard.

It's the hardest platform to gain followers on, whereas Tik Tok you can watch something and you can think to yourself "I know I can do that better" or if not I can have just as much fun as that person, and you just need to set up your camera.

So that the difference between making... to making the content's way on the other spectrum.
YouTube's harder.
TikTok is very easy.
You can upload 10 videos in the space of, you know, half an hour on... on Tik Tok and get you know triple the views you would if you'd done it on YouTube.

So I think the algorithm favours better to people, because it has like a broader spectrum of content that likes to put in the "For You" page, and so it gives people a better chance to be seen, to have fun, to interact with other people, and...
I like YouTube! I used to-- I've not made videos on that in a while and I was doing YouTube until when I was doing TikTok, like a few years, ago so I was doing both side by side, and I felt like you... your Tik Tok was just so much easier.
It was just... it's a platform where um you have to really be authentic for people to really like... to really, to really grow on it.

Whereas YouTube, you have to really have a uh some sort of... not a facade but you have to have a really different kind of push yourself like 110% whereas TikTok about maybe not as much.
I've got some zzzz'ing going on here.
Sorry I think it's a fly, my bad, there you go!
Do you know what--
That's a long-winded answer! [LAUGHS]
No, no, Steven: That is so fascinating because I hadn't thought that the actual, you know, production technique would actually have such a big effect on the what... "what you share" and how you express yourself, so have... being able to just get straight online quicker means that you put out something a bit more authentic.

I hadn't really thought of it like that.
Yeah I think that's erm... that's really, it's a really big um pull factor for when someone who starting out on social media, who wants to kind of be big.
And please hit the subscribe button below if you want to see more Great British YouTubers.
There's a playlist and a podcast. All the links are in the description below.
I'm Neil Mossey and I'll see you on the very next episode of Great British YouTubers.
[Music]