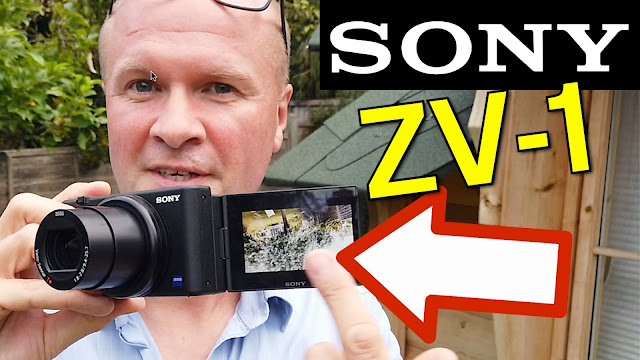 I answer all of these questions by fitting the Poyiccot "Maxhood ZV1 Screen Protector for Sony ZV-1 Tempered Glass 2Pack 0.3mm 9H Hardness Tempered Glass Flim Anti-Scrach Anti-Fingerprint Anti-Bubble" (I think they mean scratch) -- ON camera in real-time.
Will I get any dust bubbles under the screen on my Sony ZV 1 camera?! (Spoiler: I don't)

What is the best protective screen cover or screen protection for this, the Sony ZV-1?
I can't say Sony ZV 1 - that's probably why it's called the ZV1 in this country but it's the Sony ZV-1.

I want to protect this screen, it's only a couple of days old.

There are so many on Amazon, it's difficult to know where you even start.
I’m going to show you which screen cover I bought and I’m going to fit it to this in real time, and show you how I apply it to the screen by actually doing it on camera.

So if I make any mistakes you'll be able to hopefully avoid those and when we've put the tempered glass screen protector on, I’m going to show you THIS.

Thanks for clicking on this video I made a whole playlist about my Sony ZV 1 videos that's up on screen now and in the description and also the links to this camera and this screen are down in the description, but let's go into the hut and put this on this!
This is the screen protector I went for, it's the Maxhood ZV-1 screen protector tempered glass anti-fingerprint, anti-bubble, what I’ll also do is after I’ve shown you how I’ve put this screen protector onto the monitor, I’m gonna show you how it fits in this case.

I think this is the best case that I’ve found for the ZV-1 so far.
We have a patch installation cleaning kit times two.

The two concerns that you might have are... if you put a tempered glass screen protector onto the monitor will it close properly and flush afterwards?
And the second concern is "does it affect the operation of the touchscreen"

Uh, it's very responsive and there is a worry, "will the tempered glass screen make it less responsive".
So we'll have a look at that.

Now if you've never done this before, the first tip is to not do what I’m doing and do it in a hut in the garden where there's lots of dust and pollen.

The best place to do this is actually in your bathroom because it's the place with the least dust in your house, and also they say that the running water - if you run a tap that sends out lots of negative ions, that kind of makes dust particles not want to float in the air.

But inside this cleaning kit which is quite snazzy isn't it?
And we'll just clean the screen here.
Then next there is a nice small microfibre cloth to dry it, so this will take off any residue that is on your screen already, and then finally you get this sticker set.
Take off the big one.

You can use this to dab the screen just to remove any dust particles that might be there.
So then we'll get the screen out of the protective foam envelope.
This is tempered glass.

Now go for tempered glass because it's so rigid.
If you use plastic film: that's the other option for protective screens and I just find they scratch really easily.

Also when you're laying it down it's very difficult to have bubbles appear because it's so rigid.
So that's good, this sticker is supposed to lift the protective film off and it hasn't.
Let's try again.

There we go, so the adhesive is on this side under the film so it goes this way down/
I should have practiced this.
I’ll wing it.

So we'll lay it down it fits really snugly.

That's good and there you go it just lays down like that, so that's the first mistake you can learn from.
Lay it down on the screen just so you can see how much gap you need around the edge but that looks that looks really nice.

There's no bubbles, so I don't know if you can see but the screen fits really snugly into the monitor - the edges of the monitor - so I’ve already got some fingerprints from my hand but that looks great.

There are no bubbles at all because it's rigid tempered glass I much prefer it to plastic film, so I’m i'm really pleased with that.

Oh my goodness I’m just delighted that it's now got a bit more protection if it takes a fall.
I think in time I want to buy a lens adapter ring just to protect this if it ever gets dropped or banged.
Now let me show you this case.

I think this case is the best case for the Sony ZV 1.
It's from Lowepro, there's a link in the description.

Can I see a stray... there is a stray strand there, but apart from that it's a really lovely case.
It's got an outside pocket that's lined, and it has a zipper that goes halfway around and a quarter way on the other side.

You could fit this through your belt if you want to channel your inner Casey Neistat and inside I’ll try and open it up...
There's a big label you could take off, but this is foam padded and there's quite a generous foam padding on this side as well.

But in terms of size - I’ll put it in this way round - it fits absolutely perfectly.
You might prefer a hard case but I... I really prefer the the soft cases.
I just want something to just give it a bit of a cushion if it were to fall.

Let's test the screen protector now for closing and opening the the monitor door.
So one of the concerns is that having a raised surface might affect the door operation but I can't see that at all.

Look it is not affecting it at all.
In fact I can see through that, if you see the little light down there, so there's still clearance between the edge of the monitor door and the back of the camera.

You have to use a bit more of the pad of your finger but it seems to be picking up just as accurately, but like I say there is a little disclaimer there if you do tap it really lightly nothing happens-- it's working even with light taps!
From my experience this feels pretty much if not identical to when there was no screen protector on the monitor.

My Sony ZV-1 or ZV1 screen is now completely protected.
Absolutely delighted with that.

Let me know how you're getting on with the camera.
I’ve only had mine for about four days and I’ve just been terrified that the screen isn't protected, so now I can go out and shoot some more stuff so I’ve got the link to my Sony playlist up on screen now.

I’m moving sideways so I can put some videos up.

If anyone reaches this point of the video you're awesome just say hi.
It'd be great to hear from you and if you hit the thumbs up it helps other people to find this video.
If you hit the subscribe button you're even more awesome because that helps take me closer to the cherished 10000 subscriber goal that I never think is going to happen, and good luck with your Sony ZV 1