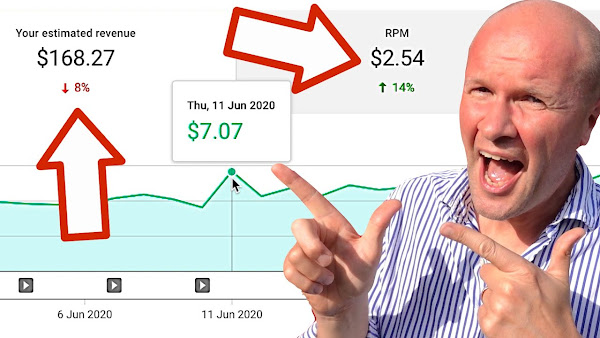 How much does YouTube pay per 1000 views? And BONUS, how does YouTube judge my thumbnails? How does the Google search engine & YouTube algorithm decide which thumbnails to serve?
I go through my first 3 months of being YouTube monetized and show exactly how much money YouTube pays me for 1000 views:
My RPM (Revenue Per Mille, or 1000) which is how much money my YouTube videos earn divided by my total number of views that month...
and CPM (Cost Per Mille) which is how much money on average advertisers are paying per thousand monetized views (so not my total views) via Google Adsense advertising - this money is split with YouTube before we are paid.
As a bonus - I also show GOOGLE CLOUD API which is the algorithm that scans our thumbnails to decide what emotions we show, and also what objects, colours and gestures we make!
How much YouTube pays me PER 1000 VIEWS


0:00 How much money YouTube pays PER 1000 VIEWS!
0:50 Footage of me working as a Researcher at BBC Television in my 20's
1:05 How to look up how much YouTube revenue I earn, in YouTube Studio channel analytics.
1:17 How to look up monthly estimated YouTube revenue.
1:55 What is a normal RPM for YouTube videos?
2:00 How much does YouTube pay for 1000 views at 1000 subscribers?
2:47 What is a normal watch time when you become YouTube monetized at 1000 subscribers?
3:50 What is a good RPM for YouTube monetized videos?
5:25 How to check my best YouTube Revenue earning videos?
5:43 What is a good CPM for YouTube videos when you are monetized?
7:15 How to make better YouTube thumbnails: I make them more colourful and impactful.
9:00 How does YouTube know what is on my thumbnails?
9:18 Introduction to how the Google Cloud API works (cloud.google.com)
GOOGLE CLOUD API (Thumbnail Analyzer) link:
https://cloud.google.com/vision/docs/drag-and-drop
If this video helps, LEAVE A COMMENT below to say hi - I'd love to hear from you.
You can also help me by clicking THUMBS UP or get to 10,000 subscribers with SUBSCRIBE here thanks! http://www.youtube.com/neilmossey?sub_confirmation=1
TRANSCRIPT: (CLICK PLAY ON THE VIDEO ABOVE)