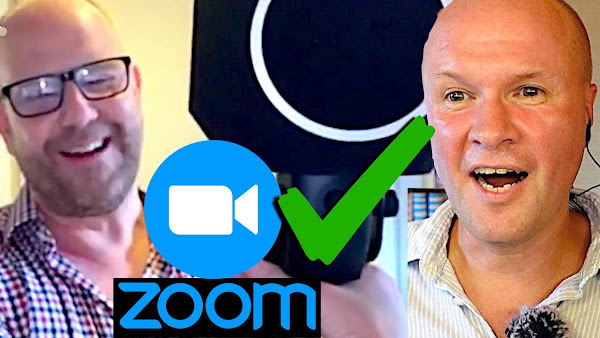 How do TV journalists record Zoom calls for broadcast?
Great advice and tips from JAY HIRST on how he sets up Zoom to get the best he can while recording interviews on Zoom conference conversations.
We go through basic Zoom video setup, with lighting, camera and sound as well as some settings to make the Zoom look good.
How to record Zoom calls for YouTube? HOME STUDIO TOUR Great British YouTubers Podcast Neil Mossey

0:00 How TV reporters record Zoom interviews for broadcast.
2:00 How to set up your background for a Zoom call.
2:20 How to use an iphone as a webcam for Zoom call - Reincubate Camo: https://reincubate.com/camo
Set color temperature and focus on iphone or ipad.
3:16 Best microphone windshield to cancel reverb or echo without sound proofing, used on a Yeti X.
5:15 Zoom vs Skype: which is better to record for TV and broadcast?
7:48 How to set up a cutaway shot during your Zoom recording: jump cuts and noddies.
9:55 How to improve your Zoom meeting call picture.
11:00 How to end a broadcast TV news interview.
11:57 The Great British YouTubers Podcast drink break
How to set up Zoom advanced settings: Enable HD video and Optimize for 3rd party video editors
13:30 How to record a 2 way video interview without using Zoom, better HD quality than Zoom.
14:00 How to interview for TV news: tips and advice.
NOW AVAILABLE AS AUDIO PODCAST!
APPLE PODCASTS
https://podcasts.apple.com/us/podcast/great-british-youtubers-podcast-with-neil-mossey/id1531020242
GOOGLE PODCASTS
https://podcasts.google.com/?feed=aHR0cHM6Ly9hbmNob3IuZm0vcy8zNGUzMGU3MC9wb2RjYXN0L3Jzcw&ep=14
SPOTIFY
https://open.spotify.com/show/4vF9Vl6rr6jYDT3VhHbxZG
TRANSCRIPT: (CLICK PLAY ON THE VIDEO ABOVE)