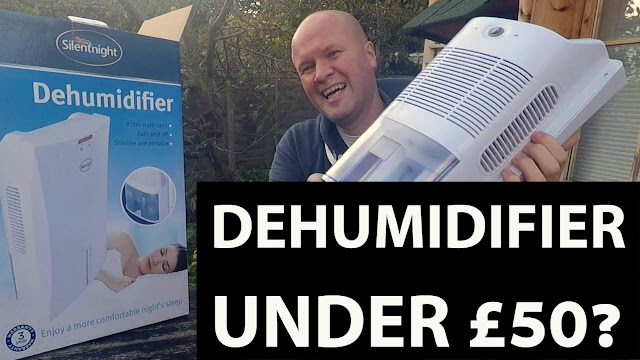 My girl's bedroom is mouldy | BEST DEHUMIDIFIER UNDER £50? Silentnight Dehumidifier


I don't know why my family can't accept a mould patch as an acceptable interior design choice
or maybe a pet?

We've been running this for about two days now and look how much water it's collected.

It's a place where we try to be happy with what we've already got as the graphic illustrates quite clearly there.

But what's this?
This is stuff!
That I've bought!

But I'm gonna try and be happy with this because this helps us be happy with our home - and instead of fixing it and making it good and safe for my family I thought I'd slap a few quid on a dehumidifier under 50 pounds
Does it work?
[MUSIC]

Well actually this dehumidifier is under 40 pounds
Got this bad boy from-- I think it's more of a lady though isn't it?
I got this from Lidl here in the UK

You can also get it on that online place - there's a link in the description
I'd better unbox it hadn't I?

So this is to make our home less dangerous - let's see what you get in the Box
get power cable... operating instructions... and what I understand it does - cuz we've got one already - it takes water out of the air

It's uncanny isn't it but this particular 10K problem I'm gonna try and crack or mitigate with £39.99
That's what I paid for it - you might find it cheaper in the... in the link below

I feel a bit intense!
As you can see the apples have fallen off the tree - winter is definitely on its way

Now this is what it looks like - you couldn't actually see the back on the online shopping site - so that's what it looks like if that helps - if that's why you're clicking on this masterpiece of content!
I love that I watch like, iJustine, and she's like... she's reviewing iPhone pros in exotic locations and here I am in... the garden with a bit of electrical from Lidl
iJustine!!!

Now this has had--- ooh, shouldn't maybe hit it

I'll gently stroke it and welcome it to our home like Marie Kondo says we should
This has had-- "Shhhh... I don't want to hear..."
Silentnight: cover your ears.

It's a marvel of technology - it can actually remove water from the air and apparently this water - having too much water in the air is - is probably the cause of this lovely sight in my daughter's bedroom
Oh it's a mold.. for the mould patch is back

We should give it a name
I don't know why my family can't accept a mold patch as an acceptable interior design choice or or maybe a pet!

I saw this on BBC Four - that when plants and animals split in evolution, mould and fungus didn't!
They carried on with the animals and they split later!
They're, they're us!
I mean basically we're host bodies for the mold
I'm not quite sure why my gut bacteria is allowing me to make them a bit thirsty for a bit

Ohhh, I'm such a bad dad
I've only got one job.
And that's to take the bins out on the Thursday but the the other job is to protect my family and provide shelter for them
So if you've got an idea for a name for our patch of mould...

Leave a comment, we'd love to name the patch of mold before we seek to destroy it with the Silentnight dehumidifier - and the way you plug this particular one in is a figure of 8 cord and it plugs in at the back here it's actually a bigger version of the little one we'd bought from Robert Dyas

The one on the smaller dehumidifier we've got - which I think I spent about 15, 20 quid on - it's actually got mold growing inside and this is sealed or I couldn't work out how to open it so that I don't know how you clean the inside

But when it fills up with water it's really clever you pull this rubber plug out, there and you can tip the water out

So the question is should I plug it in here with all the noise and do it outdoors like you're not supposed to... or should we try it in my little girl's room?

The first thing is the cord isn't that long is about a meter, meter and a half, so I've rather stylishly fixed that with a bit of power

Added that there to make it look nicer - but I guess it doesn't does it
I'll use it as a little visual aid that this is the Silent Night dehumidifier
Man... I wish I could be you

So this is what it looks like on the shelf
It's about arm's length with my big arm so I don't know sort of 40... 40 to 50 centimeters tall - which is strange because on the picture on the box look they've made it look tiny

This is what it sounds like
We'll turn it on it's the excitement - Look I've got biro on it already
That's from my hand just now.

No way, so turn it on
Now this is a bit disingenuous because my microphone is is far away but equally if I lean close that's going to give you an unfair idea of how loud it is it's like a very small fan
It's a little bit louder than white noise - it's not unbearable

It's like the sort of the first setting of an extractor fan over your cooker?
It's certainly louder than this

I'll compare that to the smaller ProBreeze - so you have a fan noise with this one but this one is definitely quieter because it sounds like a smaller fan
[FAN NOISE]
- so that might give you an indication of the type of noise if not the actual loudness in the description the first line I'll put is-- is this any good?

So you'll know if it is the best dehumidifier for under £50.
We've been running this for about two days now and look how much water it's collected!

You need never watch any of our videos again but each subscriber helps take us closer to the cherished goal of 1,000 subscribers so thanks if you are able to click on that subscribe button

Good luck in removing all the liquid from your family's home
Yeah, then that's the one - that sounded really elegant