Our dirty phone that we use for oafish companies 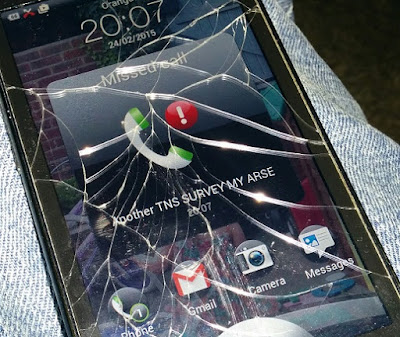 It only took me 18 years of having a mobile to work out that having a fake phone number that isn't so fake that you can't get in there to confirm it's real, but very very dirty.

My mate Rob grew up in Leytonstone, which meant he was cursed with a home number that started with the code "555".
And the next 4 digits were really easy too - I remember them clearly 25 years on.

I saw girls literally roll their eyes on seeing the phone number being handed over to them.
It could not look more fake if you tried.


All my BRITISH DAD STUFF here

Previous post...
My list of all the indulgences that stop me earning cash - (adventures of a tightwad dad)

Get these by email... I'll never give your address to anyone, ever.
Posted by Neil Mossey at 21:25 No comments: 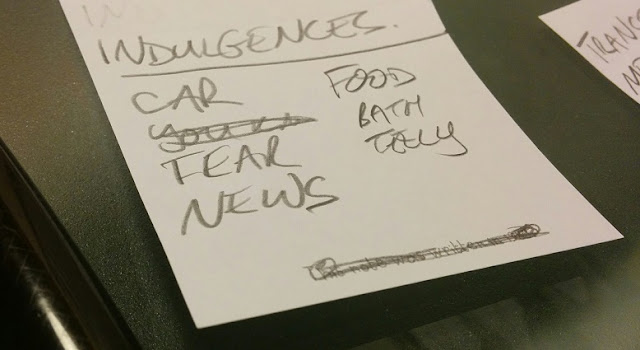 A list of indulgences that stop me earning cash.
car
fear
The News
food
bath
telly
and lists on post-it notes.

All my BRITISH DAD STUFF is here

Previous post...
How to Lego Party - (another adventure of a tightwad dad)

Get these by email... I'll never give your address to anyone, ever.
Posted by Neil Mossey at 22:39 No comments:

How to Lego Party #BritishDadStuff 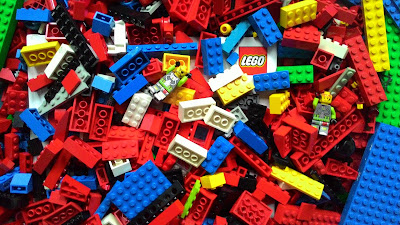 Had a Lego party, for a load of 5 and 6 year old boys, and this is how it looked.

Pulled from all over the web and our heads, so no idea who did them first: 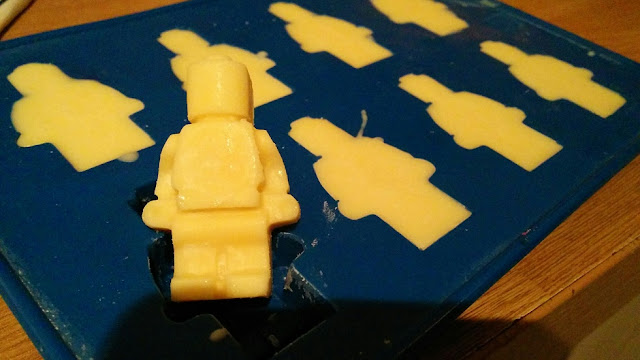 LEGO MOULDS
First off get yourself some Lego baking moulds via ebay or Amazon.

Use them to make Lego mini-figure chocolates... 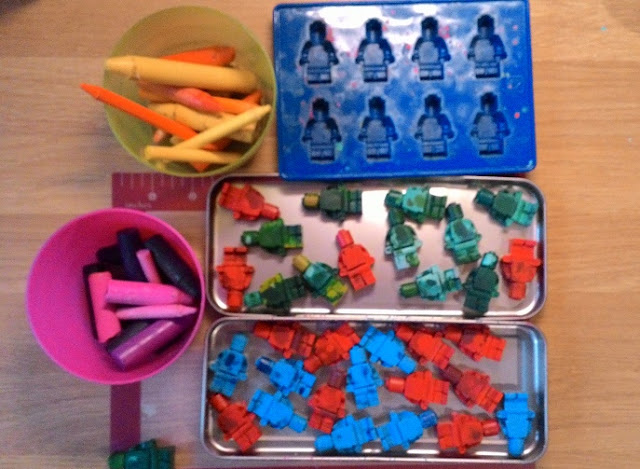 Or if you can melt down old crayons in the oven, Lego minifigure crayons... 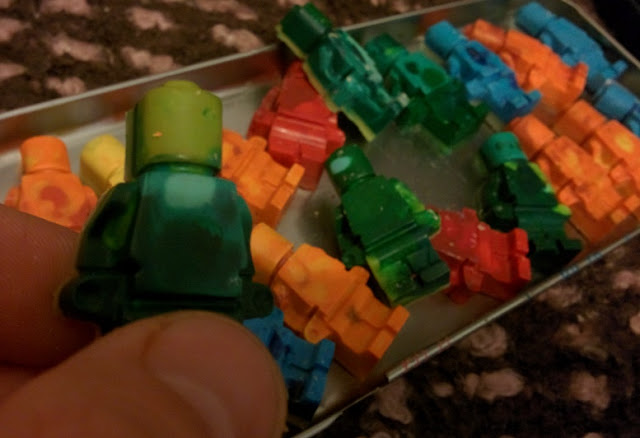 Or confuse the kids with both. They'll Lego mini-figure it out, right?

HI-VIS VESTS
In my head, we can get these in packs of 3 from the 99p Shop.
But, like all my 99p Shop head wishlisting, think I completely made this up.
Anyway, the idea is that when the 'constructors' arrive... everyone gets a hi-vis vest.

NAME BADGES
Any Dad who has been anywhere near a party knows, you need name stickers, so you're not impolitely asking "erm... you there"... to stop rubbing cake into your TV screen. 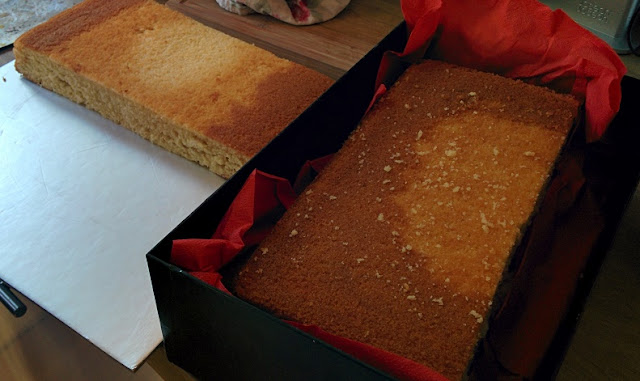 LEGO CAKES
Square and rectangle sponge blocks, with marshmallows for the nubs, primary colour icing, and decorated with minifigures standing on top. 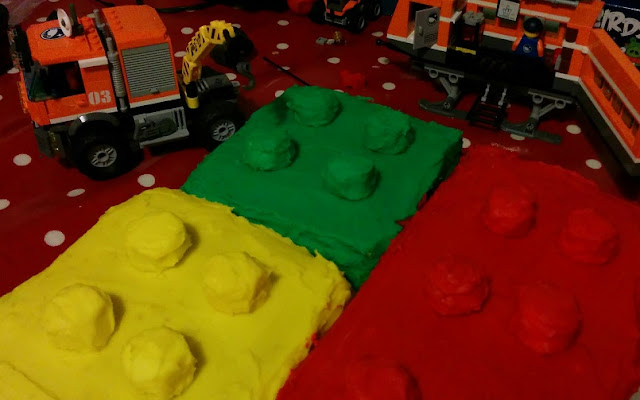 Maybe a construction crew? Or firefighters for the candles?


RED TEAM BLUE TEAM
Choose a RED or a BLUE brick from the bag of red and blue bricks when you arrive.
You get a Red or a Blue sticker for your hi-vis vest.
(OR Red or Blue laminated card on a lanyard?
We haven't got 14 lanyards.
They'd probably end up strangling each other with them anyway.)


SCOREBOARD
There's a big scoreboard on the wall, totting up the Red Team/Blue Team points.
We've not thought through the team scoring system yet.
I know that this will fall apart - like sticking to the rules of musical statues.


FREE PLAY!
When the constructors turn up, there's a big crate of lego and 13 baseplates
(Yep, managed to invite an uneven number, but the birthday boy can be the demonstrator, or something).
Anyway, during the free play, the best lego model using only SEVEN pieces wins - judged blind.
Judging/Prize-Giving at the end of the party, but that was too organised.
They just wanted to get building and talk minimally to each other. 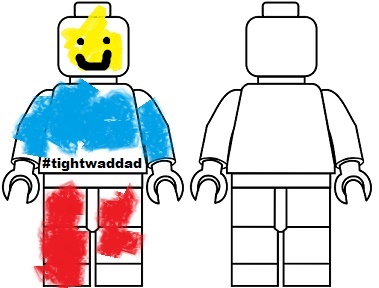 COLOURING IN - a.k.a. Design a Lego Man
A4 sheets of a plain lego character, and some pens.
Probably biggest hit of the party.


GUESS THE NUMBER OF LEGOS IN A JAR
This is weak but could be done at the start of the party too.
Needed a jar, and some things to put in it.
Plus paper for the entries (Name and Number)
This was never going to work, and everyone was enjoying the freeplay and drawing too much to pull this out.

MUSIC
The music played during the rounds will of course be from the... Transformers original movie score by Steve Joblinksy. It's mixing up the theme and brands, but it's got that right sense of urgency and action tension.
I see it as exposing my son to the wonders of Classical Music.


HIGHEST TOWER
Big box of lego, 13 base plates, 1 minute, and more music
Who can build the highest tower without it toppling.
Win points for the team - and having worked out a really complicated scoring system, realised we could just add up the numbers of levels.
Lined ths up and didn't even bother needing it.


BALLOON LEGO POPPING - RUSSIAN ROULETTE
This is my favourite one.
Each party goer chooses a blown up balloon - which all have a small piece of lego inside.
In our heads, we want this to be a 2x2 (or as I'd call it a "four" brick).
Dunno if I can get those into the balloons we've got.
Then they each pop them (thought they'd love this but had to pop some for them).
With B&Q safety goggles for the PPE look.
ONE BALLOON has a 'Golden brick' - which wins a prize. That team gets 5 points.
HALF THE BALLOONS have white bricks - they get two points.
HALF THE BALLOONS have black bricks - worth one point. 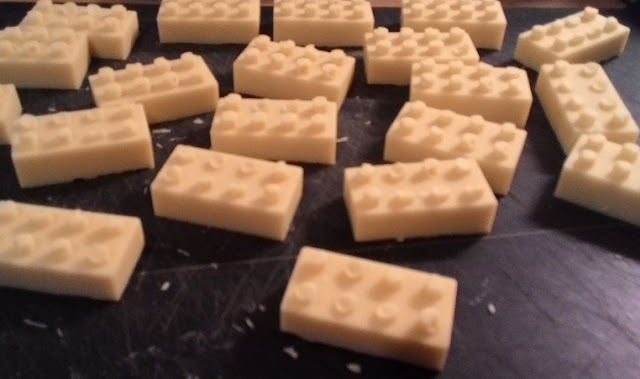 BLOWING LEGO ACROSS THE TABLE
Okay, alright. running thin now.
But all we'd need is 13 straws - and the format of this contest was:
"who can blow their brick across the table first".
Either all in one go, or heats, or timed with a stopwatch
Didn't need to bother with this one.


THROWING LEGO INTO THE BUCKETS
Every team member gets the same 5 different shaped legos
(in their team colours of blue or red).
They throw them into the two buckets which are worth 1, 2 or 3 points.
We add up the points to add to their scoreboard.
Maybe spot prizes for anyone who gets a brick into the "3" bucket.


LEGO BINGO
This was a terrible idea.
Tried googling Lego Bingo Cards to print off, but it was never going to happen.


OUTDOORS: LEGO RELAY RACE
We've got winter birthdays, so this didn't work, but for a garden...
Run to the end with lego in the cup? - Not sure about this
Doomed to failure. Especially in February. 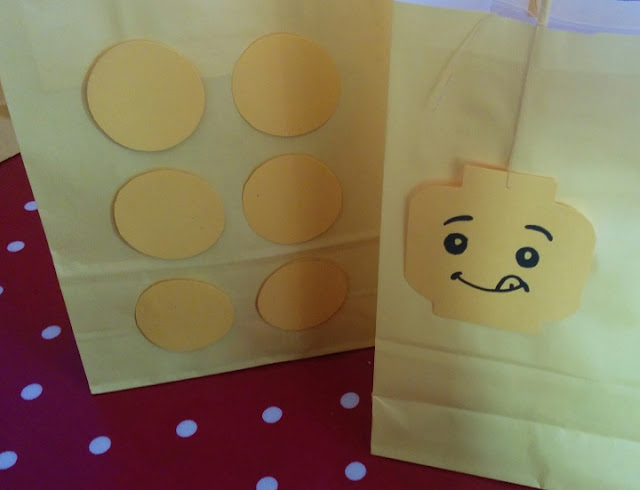 Legal disclaimer:
Lego is, of course, a phenomenally dangerous substance.
You should under no circumstances attempt any of the activities described on this website.
If you do, let me know how you get on by clicking on the tiny word "Comments" below.
Or tweet me.


All my ADVENTURES OF A BRITISH DAD here

Previous post...
I walk too slowly down Leather Lane - Dad stuff for my kids

Get these by email... I'll never give your address to anyone, ever.
Posted by Neil Mossey at 21:30 No comments: