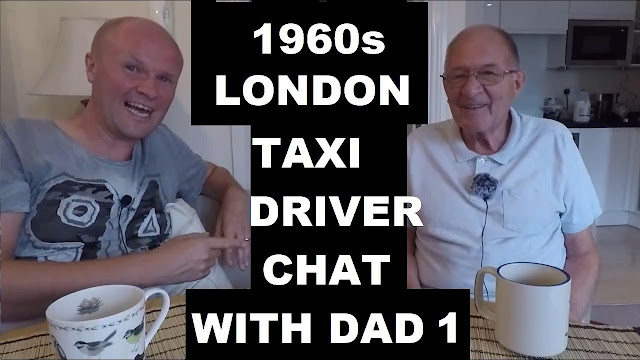 My Dad’s a London taxi driver.
A cabbie.
Licensed Owner/Driver of a black taxi.
That’s silver.

You don’t get a leaving gift and goodbye card, even after serving Londoners for over 50 years.
But he pounded the streets of London for money.
And I knew it was hard getting that licence, that Green Badge.

When he stopped driving, I suddenly realised that I had no idea how hard exactly.
Or how he got there.
Or why.

And I’ve got kids.
I know they will ask me about him or look him up in the future.
So this Summer, I set up a camera and we had a chat.


I know there are questions in here I’ll kick myself for not asking, or answers where I didn’t follow up...

But this is what he did tell me:
What it was like to pass "The Knowledge" - the toughest road test in the world: to memorise every street, building and place of interest in London; Getting the Green Badge; Hiring and buying a London black taxi cab; How London's licensed taxi radio circuits worked and how to join them; plus the tricky odd and weird customers he's faced over the years.

And I put it all in this book:


And maybe now it’s in print, I’ll end up thinking of some other questions to ask him...

okay Shall I sit down here?
[KEYS LANDING] Ooop, missed.
Crystals?
So yeah, if you're able to... talk about viagra?
No.
[LAUGHTER] Good evening and expenses, if you can put this on?
What do I do?
That - good isn't it.
How did it do that?
Looks like you sneezed down yourself.

Erm, yes so erm, I thought cuz cuz my kids are gonna ask me all these questions about you as a taxi driver in the 60s I won't be able to answer any of it because I'll probably have alzheimers myself and er... but it's just sort of stuff that I didn't know about you know what it was like becoming a London taxi driver in the in the 60s so all I know is that you would you were driving already
yes

because you were a you drove for a film company - the Italian -
What it was, we'd drive like an 8 seater - no 12 seater van - or a Volkswagen, you could open that you know open the sides up and you could put all the sound gear for whatever all the camera gear there and you know these film companies just hire stuff out almost pointless them buying a van or something like Italian television coming over here and just hire for three or four days

Then you were at a unit driver yeah for other film companies
yeah and we used to move Movieolas or something like that to drive down Dean Street pick these things up and deliver to companies all over London But something that was ideal because some days you were sort of lean, you didn't have any work so it could take your moped and go and see all points to set rules of London

you were driving already and then you you got the idea to get a taxi license
yes because I was always skint and I never had any money and I think for two Christmases you know you just didn't have any money in your pocket, and it was horrible feeling so you think well if I had a taxi license at least I can go to work and earn some money and it'd keep me out of the pub!

And when - do you remember what year this was roughly?
yes it was about the third or fourth of January 1967 I went along to the Carriage Office and
signed up and you get a pep talk and the fella says ninety percent of you will fall out of it.
I think he was right

And you - so you like sign up, and then do they do they give you a book
Yes, it's called a Blue Book which is white and had about 300 different runs that you do like Manor House Station to Thornberry Square, and you just got to... well you just do it's easy way of doing it

And in the book do they list all of the streets and basically you've got a look up all of the places of interest hospitals, police stations, anything that's of interest to London.

And erm, how long, can you remember roughly how long they give you to your first... because your interviews called Appearances
yes

Do you remember how long it was to your first appearance
yeah in those days it because they were short of drive cab drivers it was 28 days Right...
I think nowadays is 56 days or even longer than that and then they didn't really nobody knew how it worked, but this all worked out if you did a run more or less spot on you got two points if you coughed it and spluttered your way through you go one point I think when you got 18 points or 20 points they put you down to fortnights.

Right 22 points overall or 20 points in one appearance?
No more or less I don't think they would let you do it in less than 18 months

Oh, right so on each appearance could they ask you anything from the 300
Anything.
[LAUGH] And anything.

It's 50 years on and you still remember that that's why I don't get-- whenever you say - you - because you don't talk much about the famous people you've been in the cab, but whenever you do so like ABBA in the 70s you remember the run that you know
It's just strange these things stick in your mind

Yeah cuz Mum said you used to be like really like properly ill.
oh yeah I couldn't drink a cup of tea but if my...
If I was having a cup of tea before I went up there I used to throw it up.
And what would calm me was I would walk down from Harmood Street to the Carriage Office up the Angel and often that helped, but everybody was all the same there was all sitting there, petrified I don't know why - it's a form of stage fright I suppose, because you know -- you don't know what they're going to ask you and if you're doing it part-time and you need the money, you just want to pass out.
Actually if you get there and sit down and you just want to say no no no no I don't know it I don't know it and get out.
But they were there to test your temperament you know one fellow if you went in there Mr. Findlay and you had to stand there and wait till he told you to sit down - if you sit down he wouldn't mark you, you'd have to come back in a month's time.

No - so they could bump you out that quickly!
Oh yeah!
But it was all designed to wind you up.

Yes.
You couldn't call what was it, the QV the Queen Victoria Memorial outside Buckingham Palace - it's nickname was was the wedding cake - but no way would you be allowed to call it a wedding cake.
Or the other story was even if you get to Tower Bridge and the fella said "keep on" well the fella said that Tower Bridge is up, and of course that didn't go down very well.

Did they do it to you?
Er no.
Or you just heard about it.
Oh yes.
I was so petrified...
I think I'd be frightened to--

Yeah, and when you were learning the the knowledge were you on a moped or a bike?
A moped with no crash helmet.
Like a Delboy cheesecutter (hat) you had on, it was part of the uniform.
And what like a clipboard on the front?
Yes.

And would you write the stuff out before you went out or would you like tear pages out of the book?
No no you just write - usually if there was four runs you could stomach that - or get it in your head - if you went any more than that it was too much and the run was more or less all the roads you went through I mean I like a fella finished the knowledge and he gave me all all the runs.
And then some you could easy top of your head some on you stumbled and some you couldn't remember at all mine was all over South London - and I had like three piles - the easy ones - not so easy ones and the hard ones and you used to call it over with you girlfriend - I used to call it over with Vera, my wife.

So then - what you've have them written out
Yes each road.
And if like I don't know is this how you used to say it - "Forward down Agar Grove, left into York Way..." yeah and like "comply roundabout"
yeah, "leave by..."
I think so long as you knew which way you were going I think they fell asleep


Previous post...
What if I'm never ready for the next National Crisis? #WeAreTheProblems