What if I change all President Donald Trump tweet exclamations into question marks? (And 9 other major improvements for happiness) #PowerDaydream 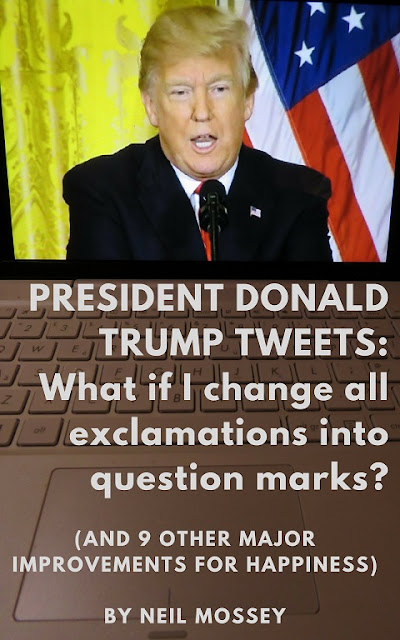 I want to change the world, but I am also the World's Biggest Daydreamer.


WHY AM I DOING THIS?

Hello. I’m Neil. And I am a recovering News addict.

It’s been a tough year.

I’ve got nothing against the News or anyone else who hands their lives over to the News.
I just don’t think it’s as important to me as the time I give to watching it.
The News doesn’t help me achieve what I want to achieve.

I don’t know what I want to achieve.
But I know in my bones that watching the News will not help me achieve it.
And that’s difficult to write because the News is all about arguing the toss, and right now I can hear all those arguments in my head.

Some of my very favourite friends in the World work in the News - and I love them - and I am proud of them and their work, and their colleagues who put their lives in danger to bring it to us.
It is difficult work and they are skilled.

I just don’t think any of it is for me any more.

“The News” never reports when a school trip returns safely...
...or when a Social Worker does a good job.

It seems to be about urgency, rather than perspective.
And it’s on an agenda, driven by people who are not friends, or friendly, in a system that is gamed daily.
For profit.
And not for us.

I couldn’t tell you one thing that happened in 2015 - the last year I was a fully-functioning junkie.
All that scrolling and clicking.
All those free newspapers on the train and in the coffee shop.
All that rolling news, those bulletins, and BBC Radio 2 top of the hour updates, breaking up the fun and laughter and creativity.

And I don’t think it’s because I can’t link important events to a year.

I figured, if I can’t remember it, that’s probably a sign I should go cold turkey.

Even though I abstain from the News (because I am still an addict) - somehow the President of the United States still manages to get tweets into my eyeline. And each time they did they made me feel sad.

I even had a major wobble in my News-sobriety (I haven’t got a word for being News-sober. Is it Realiteetotal?) when someone whose life had hit the ultimate low that they then had to cause carnage in Central London.
That’s where I am from, and where I regularly go to work.

But they did it, ironically, so that they could get themselves on the News.

And there I was gawping again. Like the oafish enabler that I am.

The News you’ll use will always come to find you. Try it.
And there they were again.
Those tweets from the Leader of the Free World that make me feel bad.

And I know that I am the problem in this equation.
But I’m not entirely helpless. I am a writer and a script editor.

At first I wondered if I should get my 6 year old daughter to deliver the tweets as a script rewritten by me?
Would the edge be taken off them?
Would they have a different effect?

But that felt arch.
I didn’t want to look back in years to come and see how I had wasted minutes on her precious life on something so fleeting - so pointless - like the time I wasted gawping at those poor souls in that massive tragedy that I can’t even remember from 2015.
And I don’t really want to expose her to those words.

This was a clue.

So was it the words that were the problem with the tweets?

I knew that looking at them again might cause me to fall off the wagon - but time had passed since they were written, so maybe it was okay to look at them again.

What made me feel bad wasn’t even just the words, but also the very grammar and punctuation.

Those exclamation marks. All over the place.
In AMERICA (sorry, “America” - I have read too many Presidential tweets. I’ll get onto the capitals in a moment) In America, they call them exclamation points.

That’s what they’re doing - pointing - passing judgement and, like the News, always after the event, pointing the finger.

It’s as if he’s yelling at me like it’s my fault.

What if I rewrote the entire year of the Presidency without the exclamations.
Would that make me happy?
There’s yet another question.


What if I rewrote all of the tweets with questions instead of exclamations?

Would I be able to digest these and feel like I’ve learned something?
Anything?
Would it come off as more curious?
Would I consider more different angles?
Would the tweets sound more wise?

Okay, I’ll give that a try, but after rewriting a whole month of history (January 2017 - the month leading up to the inauguration) there were other words making me feel bad.

Anything written in capitals.
I know, I’m over-sensitive (and I overuse hyphens).
But do the capitals add to the badness, because I’m assuming they are Alpha judgements telling me what to think.
I couldn’t rewrite all of them.

What about the main ones?


What if FAKE became THOUGHT-PROVOKING.
(I’m not sure I like the capitals still, but it might just seem loudly curious).

NEWS could become TIMEFILLER.
Not because I disrespect the News, but because I am a recovering junkie.
It would help me to remember that I don’t need to be spectating.
Maybe I could make it case-sensitive.
No. Let’s have News and news also as TIMEFILLER.

Best of all, most inclusive and optimistic of all...
What if AMERICA (the ones in capitals) became THE WORLD?


The only other words that jarr now are:

“dishonest”
That would be rewritten as “thought-provoking” - leave it for us to think, consider, and review.

“North Korea”
Could become “Our fellow human beings in North Korea” as a reminder that there might be sad and scared people there too.


Did I mention I’m scared?

I shouldn’t be. I mean no disrespect to the Office of the President. I am merely about to reinterpret the most powerful man on the planet to see if I can understand his tweets on a deeper, potentially more curious level.

We shouldn’t be here reading these - you and me.
But let’s see how we can come out of this in one piece on the other side.

This is my version of events and how I would try to make them better.

I published them in a book,
"President Donald Trump Tweets: What if I change all exclamations into question marks
(And 9 other major improvements for happiness)."

It's available on Amazon now. As an Amazon Associate I earn from qualifying purchases.


Previous post...
What if I want to change the world, but I am the World’s Biggest Daydreamer #PowerDaydream

All about me, and getting these by email.
Posted by Neil Mossey at 10:06 No comments:

What if I want to change the world, but I am the World’s Biggest Daydreamer #PowerDaydream 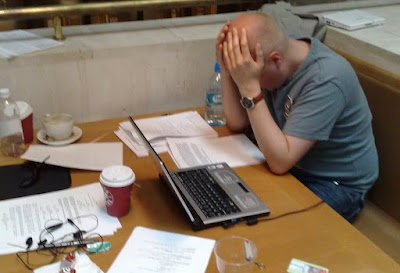 (picture taken by a writing partner before my diagnosis...)


A few years ago I hit my forties and found out one day that I stop breathing in my sleep.

Every night, while I was asleep, I would stop breathing 15 times every hour.

I'd close my eyes and, without knowing it, I'd also close my lungs.


The doctor giving me the results asked me to guess the longest time I stopped breathing.

He turned it into a game probably to keep me awake.


I stopped breathing, on a completely regular night of sleep, for 100 seconds.

I couldn't even try that if I were awake.


Though with my concentration that broken the longest I could focus on doing anything, like not breathing, is about 100 seconds.

Your body keeps going without ever actually getting there.

Anyway I got it tested and got it fixed and now I wear this breathing mask every night and it turns out my wife isn’t into Darth Vader.
Which is a shame.
Or second-hand air-conditioning units.

But I’ve got an even bigger problem.

I am now getting some proper sleep.

I had no idea how tired I was, I just knew that I couldn’t make a decision or finish a thought.

That’s how I started off working in comedy.

I would start a sentence right here, and it would finish off... SOMEWHERE OVER THERE.


The downside was that I would spend entire days... entire decades... daydreaming.

I thought this machine - the one that keeps me breathing through the night - would give me proper brain-restorative deep-cycle REM rest.

But I still can’t make a decision, or finish a thought...
...only on a much grander scale.


It got me daydreaming some more.
"What if I turn my biggest weakness into my greatest strength?"

But I have thousands of ideas that I haven’t acted on.

Over 3 decades of being the World’s Leading Daydreamer.

So now I want to share as many of my daydreams, with as many people as possible, to make the World a happier place.

I feed my family by daydreaming.

That, right there, is my first Power Daydream.


Previous post...
Companies want our data. Lets give them our feelings too - and other #DadDirt 190-196

All about me, and getting these by email.
Posted by Neil Mossey at 10:01 No comments: