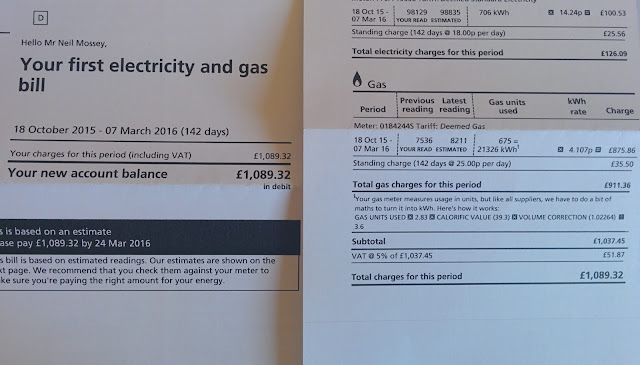 My energy company sent me a gas bill for £1000.
On a gas meter serial number that didn’t exist.
And the bill was estimated.

But they sent Debt Recovery after me anyway.
The really stupid thing was when I reacted to it like it is people.

It’s hard not to when you’re getting threatening letters demanding payment for the gas not used through a meter that’s not there.

The actual poor call centre people who read their scripts very sympathetically said that they will “escalate it to a complaint.”

I didn’t want to escalate it to a complaint.
I had no complaint.
The serial numbered meter I was being billed on wasn’t there, and the gas hadn’t been used.

They said it had to be escalated to a complaint so they could deal with it.
Then I started getting calls from Debt Recovery, which made my brain snap.

I said “Why are you recovering a debt on an estimated bill?”
“That is irrelevant, Mr. Mossey” Poor ‘Sam’ at Debt Recovery replied.
“It still needs to be paid for.”
My brain then broke.
So I couldn’t snap it again.

I should have left it there.
But I didn’t.

I hoped it would get Debt Recovery ‘Sam’ to be a little kinder on her next call.
To someone with an actual meter and actual gas they can’t pay for.
Keeping their kids warm.
Or, judging by my estimated bill, smelting steel girders into bars.

She’s not the problem.
And this is how I found a key to how we can change this.

If we take the time to be kinder to each other, during those nonsense transactions: and really take up as much of their time as possible, it wrecks the company’s ability to bully us like this.

#teamTIGHTWAD tip:
They want our money and data, let’s give them our feelings too.

So when my energy company behaved oafishly in its financial favour again, I think I was ready for them...

We are #teamTIGHTWAD, and this day we found joy spending on...

Previous post...
My Kids Watching My Trip To London #teamTIGHTWAD 020

All about me, and getting these by email.
Posted by Neil Mossey at 10:04