What if my eyebrows are too long for this world? #WeAreTheProblems 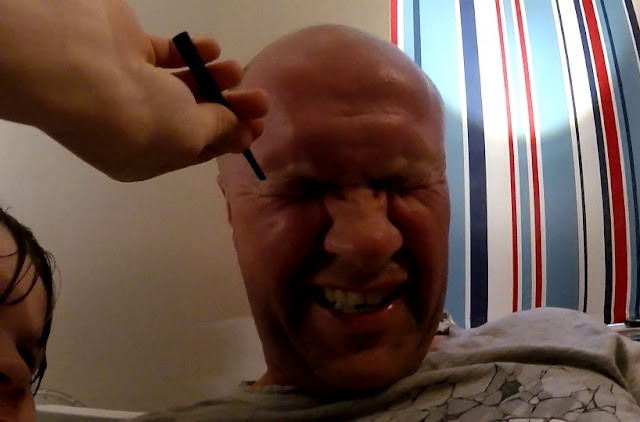 What if my eyebrows are too long for this world?

I got my 9 year old son to pull out my eyebrows, and I really regret it.
Because now I miss them terribly.

I liked brushing them up the wrong way.
Like I used to gel my hair in the 1980s.

I don’t know why straight men are so bad at grooming.
But I do know that’s why we gave it the worst possible word.

And the worst place to do the grooming (ugh, that word...) is the bathroom.

Breeders like me know from birth that this is not a place for us.
It’s where we’re at our most vulnerable.

Have you seen how straight guys treat bathrooms?
The very last thing on our minds is tinkering with our appearance.

I went to my young son for help.
Turns out he had no problem whatsoever with ripping out hair from around my eye sockets.

And I’m glad he did, because it’s the perfect male bonding exercise.
Plus when I’m yelping in pain to my wife, man does she go on about childbirth.

So I’ve got my 9 year old plucking my eyebrows with tweezers.
He’s going at it like some broken game of Operation: one body part and 100 times the noise.

He went for the longest strand first.
“It’s like prison”, he told me, “You’ve got to take the biggest one out first as a sign to the others”.

And he didn’t stop.
Mainly so he could learn the more swearing.

I’m not so sure about it though.
Removing eyebrows is to make you look younger.
To look less experienced in the world.
So you don’t come off as a threat.

Which is kind of sneaky.
It’s like having a nose job before having kids.
And the baby comes out with an unexpected face.

And eyebrows are there for communication.
This is why women pluck theirs more than us.
They’re much better at picking up on the signals.

I need all the help I can get.
Mine had grown to the length of CAPS LOCK.

One day my eyebrows will reunite with my nose hair.
Then my kid won’t know where to start.


Previous post...
What if I can't even get healthy eating right? #WeAreTheProblem

All about me, and getting these by email.
Posted by Neil Mossey at 15:21