What if my Non-Disclosure Agreement is so Top Secret that it doesn’t even exist? #PowerDaydream 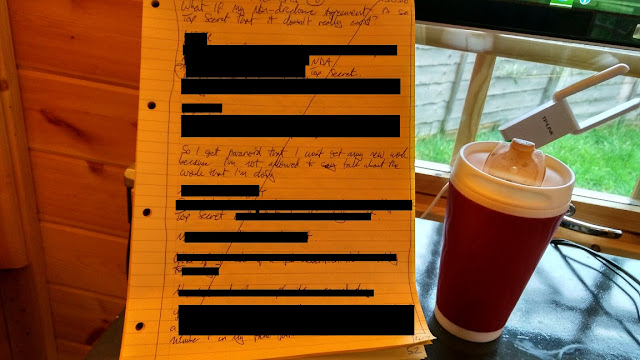 What if my Non-Disclosure Agreement is so Top Secret that it doesn’t even exist?

NEIL is in the car with his LONG-SUFFERING WIFE (LSW)

NEIL
When I write for someone else I have to sign a Non-Disclosure Agreement.
An NDA.
It means that I can’t tell anyone that I am doing the work.
It keeps my work for them Top Secret.

But telling people about what I am doing is how I get the work in the first place.

So I get paranoid that I won’t get any new work because I’m not allowed to talk about the work that I’m doing.

So what if - to break this cycle - I start talking about Top Secret work that doesn’t actually exist. No-one can call me out on it.

What if I made up a job description that’s completely Top Dog.

But what if I do so really well in this fake job that I end up challenging the fake hierarchy and fake resign. Because I’m not being fake recognised for doing such brilliant fake work at this company whose fake future rests on my fake Top Secret contribution?

That wouldn’t look good at all.
Because now I’d have 2 fake jobs in such a short fake space of time.

I wouldn’t resign from the made up job.
I think I’d fake staying in the fake position.


Previous post...
What if we spray stuff Gold to sell online? #POWERDAYDREAM