They built a coffee shop around this guys work #DadDirt 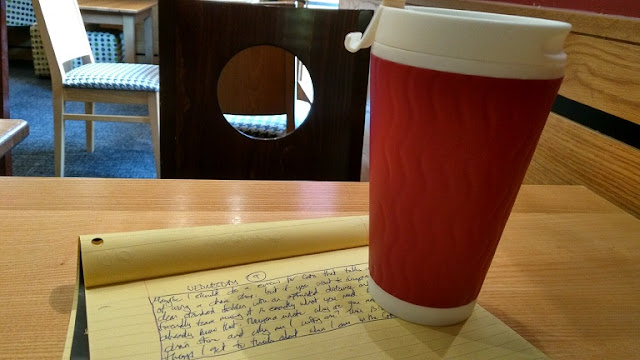 You know that you are a Great British Dad when...
...you take a break from work and you're still at work.

A man bellows into his phone.
I'm there with my Long-Suffering Wife (LSW) within earshot.
4 tables away.

MAN ON PHONE
Here's my proposal to you.
You're saying you want some clarity on how you will be paid and the setting of your performance targets.
But if you're saying that's not big enough, you want something bigger, we have to look to the 3 month mark, not the first payment.
This target has to be about a repeat of business...
It has to grow, it's not a 60% target, it's not 100%.
So long as we make those targets about volume.
We have the team.
We have the resources.
But it has to be an achieved target."

ME
He's saying he has the team, and the resources.

LSW
Into his laptop.
On a table.
In a coffee shop.

ME
That is his team.
And his resources.

MAN ON PHONE
We need to write a summary.
Do you want to do that now?

ME
He's not even offering to do any of the work.

LSW
Just talking loudly about it instead.

ME
You know, if I can hear it over my Chips soundtrack, technically that makes us his co-workers.

LSW
Someone built a coffee shop around his work.

Previous post...
How my daughter sees me as a man. In biro. And it's uncanny in every fault. #DadDirt