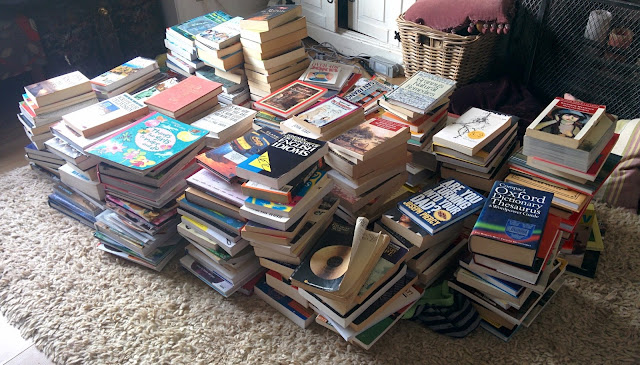 You know that you are a Great British Dad when...
...you want to clean up your computers as much as your house.

So we got to Friday, and I managed to put out one thing every day.

And we hit the Friday when nobody reads stuff online, which is where I can bury the good stuff that might be embarrassing, or get me into trouble.

For ages I've been working on this theory that I've not told anyone about. We had a go at throwing out all the clothes, CDs, books, papers, furniture and junk that we were hoarding at home - using a book called The Life-Changing Magic of Tidying, by Marie Kondo.

It went really well - I wrote about it here and you can buy it here.
Heck, let's give it its own sponsored box (so I can earn 6 cents).

We threw out (or in Konmari speak, "let go") of around 14 full car loads of "stuff" to the tip, friends and charity shops.

It worked really well, because you follow a very strict order of "stuff" to go through, starting at socks and ending up at the highly personal "photographs and mementoes".

Because you graduate through the levels, like some kind of martial artist - when you get to the photos, you know instantly the ones that "spark joy".

The ones you want to hold onto.
Keep close.
Give them some space in your home.

But here's the thing. The place came to life: like it wasn't groaning under guilt and "stuff". (The next book I want to go through is
"Stuffocation" - I'll try to let you know how that goes.)

So I've been thinking - a lot - about clearing out my hard drives. All the electronic data, ideas, documents, more pictures, and half-notes that I've put into the computer over the years.

So is throwing ideas away - by deleting them, or not backing them up, or transferring them to a new PC or cloud account, the same as not hoarding?

And the theory is this. The stuff I like. The stuff that "sparks joy" are the ideas I want to share - publish, rewrite, put in a public space.

Isn't it funny that it's the exact opposite from physical things and junk - that you give away, keeping the good stuff close? With thoughts and ideas, the good ones - the ones you like - are the ones you want to share and spread as far and wide as possible.

So, the best way of backing up those ideas, is probably putting them out there.

I'll go one further.
The fear of putting your ideas out into the world, is the fear that it will help someone to come along and take all of your stuff.

But you know how good it feels when someone hears your ideas though, right?

Your junk at home might actually be safer now than at any other time in history, and it has never, ever, been easier to share your ideas.

I'm curious.
Do you still want to talk about what's in the news this week?
(Or is that fretting more about the fear of someone coming along and taking all of your stuff?)

Previous post...
My girlfriend wanted me to go to the clap clinic, but there was nothing wrong with me #BRITISHDADSTUFF

It might be easier to get these by email. If it is, just click here and send me your address and I'll send something over until you say stop. Promise!
Posted by Neil Mossey at 16:58


And click here for the link to
Amazon US


Thanks for all your support!