Costa asks me the same questions every time Im in there. And I worry about giving the same answer. #BritishDadStuff 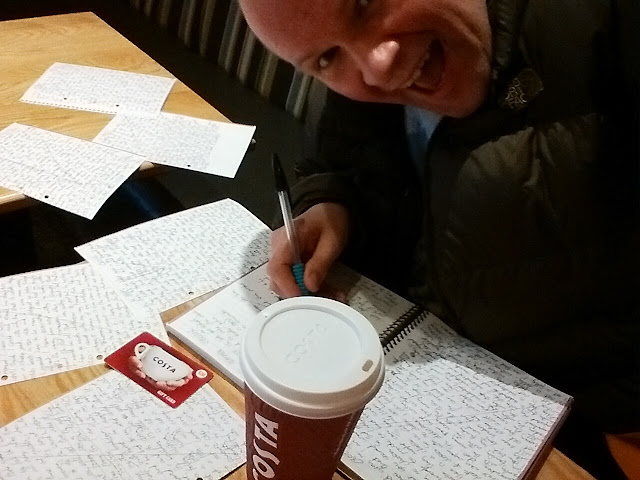 You know you're a Great British Dad...
...when you feel reassuringly taken for granted.

Costa has been asking me at the till if I would "like to try their new blend of coffee" for more money for over a year.

We always do this same exact dance, every time:

- They ask if I would like to try their new blend.

- I always politely decline.
(Sometimes I ask if it costs more - not by being arsey, but just because I've been asked so many times, I forget the answer.
It does.)

- They ask if I'd like any pastries or cakes today.
Worded weirdly exactly the same way each time.

- I always politely decline.
(Though sometimes I do that lame joke where I pat my stomach and say no, I'm big enough as I am.
Which isn't even funny.
But they're not changing their material...
How have I got so jaded that I'm not trying out new stuff though?

"I've already had my five-per-day, thanks."
"Can we do some kind of deal for them for no money."
"An inch on the lips is a lifetime on the hips, no, wait that's not right."
"I would. But their profanity is an offence to the eyes of Our Lord."

And it's even more weird, because I know we're doing this dance because the poor till girl would probably get yelled at by her Manager, but her Manager is really nice so maybe they're under the kosh of some secret shopper and internal review thing.

But I've been doing this dance now for nearly a year now, so when I'm asked if I want to try the New Blend, does that mean it's still a new blend?

I've been turning it down for so long, am I now missing out on something.

But that's what they want me to think.

I don't know what I am doing any more.

I can't even order a cup of coffee right.

I changed my order to a herbal tea.

Turns out it's less money.

So long as there's not a new blend of tea.

Would you like to try my New Blend of Guide to Understanding Your British Dad. When it's complete.

Would you like to try my New Blend of previous post?
I try and listen to my wife. But she has nail varnish eyeballs. #BritishDadStuff