Fishing out toys from behind the radiators using only a strip of Hotwheels track British Dad Challenge - another #BritishDadStuff Gameshow Round... 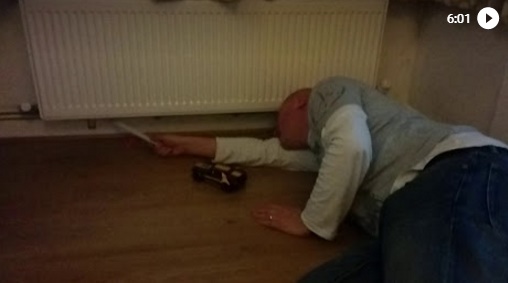 You know you're a British Dad when...

...you find yourself lying down with a strip of HotWheels™ track,
trying to fish out toys that have been jammed down the back of the radiators.

Last week, the first round was trying to walk across the kids bedroom floor with bare feet.
This was the first round written years ago,
but annoyingly published on the exact day Lego decide to release lego slippers.

So this is the next round for my British Dad Stuff Gameshow:

Fishing things out that have been jammed behind the radiators...
with only a single strip of Hot Wheels™ track.

Had a bit of a problem developing this round.
We threw out a load of the plastic stuff on the last plastic purge
- there should be a national holiday for that, with it's own character.
(He's going to be called the "Night-time Midnight Plastic, Crap Toy Bin Bag Man".
I've written a song and everything)

Tip: The trick with this round is that you spend 5 minutes with a single track before working out that you need a section bit of track to pincer and scissor out the toys from the bottom up, to get the bulkier ones like Big Jigs™ train carriages round the skirting...