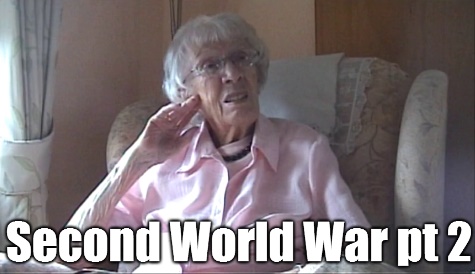 Here's the second part of the chat with Nan:

And here's the transcript (timings are for the full video here)
(Click CC on the bottom of the video player to bring up subtitles.)

That was when I was discharged in the Christmas from the RAF. Christmas '42?
Yes, well I was married while I was in the WAAFs, I first went to Gloucester to get kitted out, then we were sent to Morecambe to do our training... then after that I was just sent to Bournemouth...
with the Canadians (Canadian Air Force), stayed there for a few months, then sent to Brighton.
With the Australians (Australian Air Force).
I was a stencil typist then. Because they ask you, when they interview you.
What are you doing? You see.
So I was in an office, naturally they wanted me to do the same sort of thing in the WAAFs. 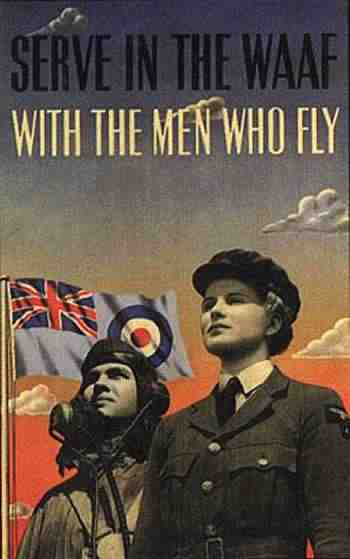 (WAAF recruitment poster from the time...)

12:25
I would've liked to learn how to drive, really.
Because then I would've had to do it, wouldn't I?! Would've got over my fear.
When they provide the training for that kind of thing.
That's right. And then I was discharged from Brighton. So it was not exciting at all. The Maoris were there... we had parties. You know, concerts and dances, naturally. 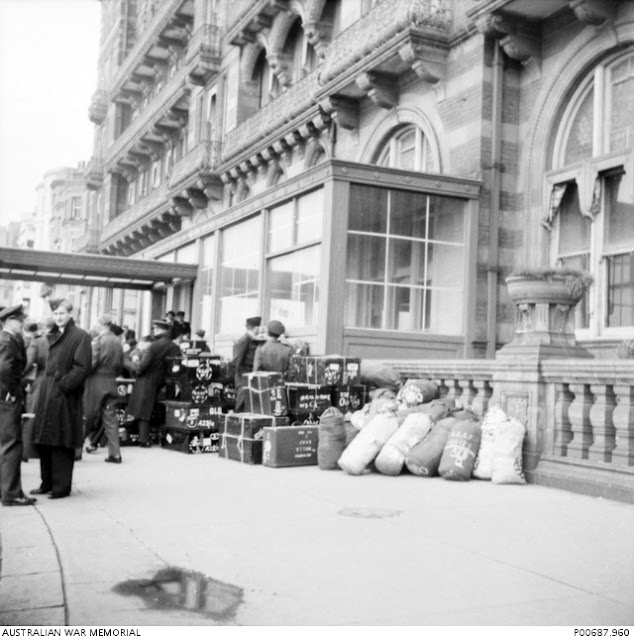 (all photos via Australian War Memorial)

So how does that work, that they had different nationalities in different towns? You said the Australians were in Brighton? They just use that as a base for the Australian Air Force?
'Cos I worked there, I think they were all waiting to be sent somewhere, abroad you see, and I was doing officers records.
Stencilling them.
They had to be ran off.

13:25
It was in the hotel I worked in that Maggie Thatcher was in, you know it was bombed?
Oh yeah, the Grand Hotel? That's where you worked?
I worked in that one. And the hotel where I lived was only a few doors down the road.
At another hotel, a small one. 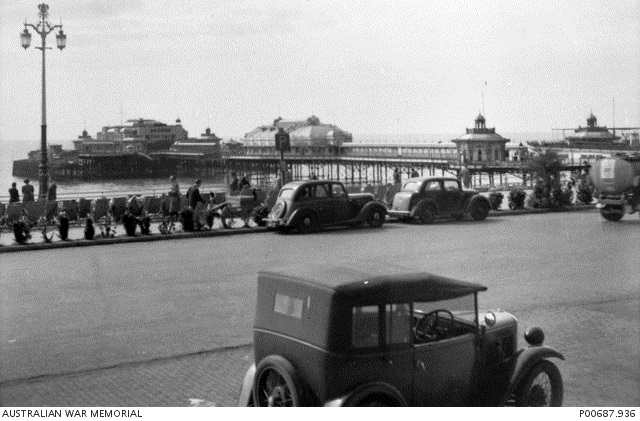 (the view from where she worked...
from around the time she worked there)

13:40
So when you're working there, was there any flying nearby, or was it just an administrative place?
Just administrative, that's all.
And did they clear the people out of the town then?
No. Normal town. Because I used to go get the station from Brighton to, gosh, was it Victoria? Because your Grandad was still at Uxbridge, and he used to come up and meet me, then he used to take me back when I went on Sunday night. 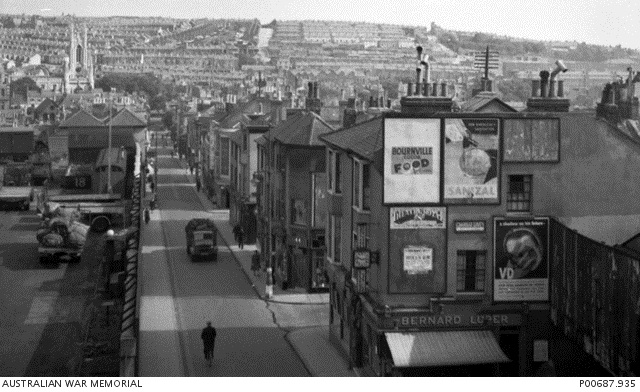 (the walk home from Brighton station around the time Nan was er... stationed there)

14:14
So you'd stay there during the week, in Brighton? And they'd put you up in a hotel?
Sometimes you'd have to stay there, you know. You get um, you work so many weeks, then you have to have a week "on duty" as they'd call it.
Not doing anything but you're there, you know! 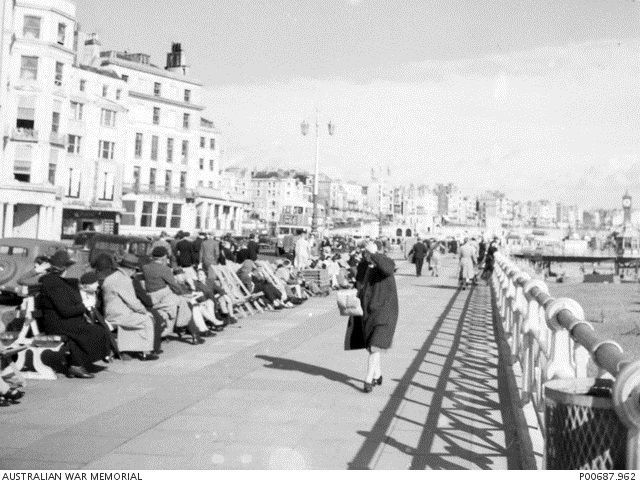 14:57
So you had, what WAAF rations there?
Five inches of water, you know, and all the baths were painted. And you had three in our room. And you have to make your bed every day.
What the water line was painted? On the bath, yes.
So you couldn't put more water in?
No, no. Five inches I think it was. 'Cos showers weren't even conceived then, were they!
So you had to fill the water up to the line that was painted on?
Yes.

15:28
Just going back, because it's interesting, I don't know how... You're just bringing it back to me cos I can't remember.
Just to follow the story...um... Grandad went into the RAF, and you were in Kensington intially for 3 years.
That's right.
And um did you meet Grandad at the weekends then, because he was in, or... was he just all over the place?
He used to cycle over at night, used to see him most days!
Cos you were living in Ealing, and he was living in Greenford.

16:15
With his mum and dad?
His mum. His dad died... while I was going with him.
He was over with me one night, and um, his Uncle came and a friend to say his Dad had died at work at 42.
I think it was just 42 or 47, I can't remember.
He had a heart attack.
And Eric remembered the night before, the day before that he'd got pains in his shoulder.
And this was Alexander Mossey?
So he collapsed in the lavatory I think on the cloakroom at work.
I think he worked at.
Oh god where did he work now.
No good me trying to remember that.
I think he was at some sort of an engineer.
No it won't come to me.
Quite local really I think, Paddington area, Westbourne Park was it?
I think that's where he worked. To do with the railways.

17:20
And then, you went to Gloucester initially?
Got called up, had to go get kitted out somewhere in Gloucester.
Innsworth I think it was? I can't even remember the name of it.
That rings a bell, think I've driven past that. Not far away anyway.

17:42
And what was your rank, I don't know the terminology?
Just an Ordinary Leading Aircraft Woman - something like that. No rank. Just the lowest of the low.
And did they train you?
Just marching. Just for marching. That's all, we had to learn marching.
The first day we were there, I just don't know how it was, or whether we were just sent round to the commands that we were with.
But Vera Lynn was on at the theatre.
So we all went along there.
You soon make friends with people, don't you.

18:20
How did it feel going to.. were you in Gloucester for long?
No. Was it a week. We were there just a week to get kitted out. And the haversack. Kit bag.

18:35
Did it feel odd, because you've left home?
Yes. Especially living in the Nissan Hut with all these other girls, just for a week.
Got used to it though!
And would you've stayed with these girls?
No. Don't really know them.
Don't think I went with any of them, again.
They were all doing different things.
Some were cooking... some, don't know what they were doing.
So it was just an orientation week, just to get you all-- kitted out.

19:12
So did you get your uniform on the first day?
Do you know I can't remember that. Must've done. Must've done. And you did some marching.
When we got to Morecambe. Then we had passing out parade. Learn how-
At the end of the week?
I think we were at Morecambe a month.
Okay, so you went from Gloucester, for a week, to Morecambe. And what was, was that a different bunch of girls then?
Oh I think so, yes.
It was only when I got to Brighton that I was in with Anne Dalby and Georgina, that um her husband was in Tanmere.
That's how we got friendly.
Then I got friendly with the girl, she was in the office.

20:00
And she recommended a place in Torquay to have our honeymoon.
Where Grandad and I went on honeymoon, to Torquay.

And how do they know what you can do? Do you have to tell them?
Yes, we had interviews.
And that's where they wanted to know what I was doing, in private, you know.
In my private life.

And what did you do the rest of the time?
God, I don't know. I know it was blackout.
Ooh, this house we stayed in - it was as gloomy... Do you know I can't remember the meals.
I know someone had gone through my case and took a collar.
So that must've been one of the girls that were there.
I can't remember those at all.

21:05
And so you were staying in a house in Morecambe?
Yes that's right. I expect the woman was paid you see, to have us there.
I don't remember making friends there at all, isn't it funny.
Some people you do, don't you.
But we did when I got to Brighton, I did.

21:28
So at the end of the Morecambe month?
We all had to get to... Bournemouth.
And did you say you had a passing out parade?
Yes.
Was that in Morecambe?
Yes, that was in Morecambe.
Did your parents come to that?
No, it was just for the us WAAFs.
And then basically they tell you where you're going next?
That's right. I can't remember how I was told or anything like that.
Were you the only one to go to Brighton, do you think?
I don't think so.
I think a group of us must've gone.
But I can't remember that.


Full transcript and the other videos, are all here...

Previous post...
A kitten rolling up like a Transformer... it's funny cos it's sacred and profane #Screenwriting

You can subscribe to my blog, direct by email, here.
Posted by Neil Mossey at 20:55