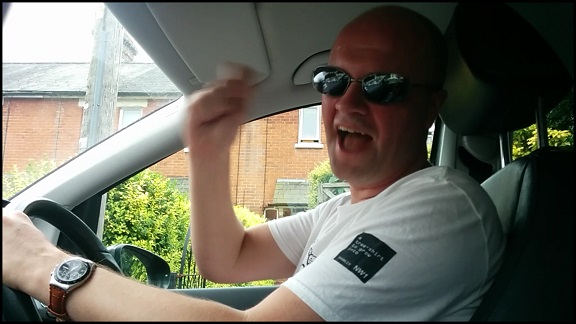 You know that you are a Great British Dad when...
...there’s always more technology you can buy.

I want to get a dashcam for my car, and I don’t know why.

A dashcam is this camera that you put on your dashboard to film out of your windscreen.

Like videoing it all, is going to somehow prove that everyone else’s driving is worse than mine.

I already know that.

And now even more stuff that I won’t get round to watching.

I’ve got photos from my children’s birth that I haven’t opened yet, but I’m now going to store and record footage from every trip to Lidl as well?

And you know these things record the sound of what’s going on in the car.

I’ll say it.
I would prefer to get crashed into on an illegal move than have to release video footage of what I say in the car.

That’s a big thumbs down on your B-road Barneys.

I’m fed up with the evidence gathering.

Every time I look up there’s 3 cameras pointing at me that probably aren’t being looked at.

How about something on the dashboard that lets the moment go...

Something that instantly offers forgiveness.

Oh yeah, we’ve got it there already.

“What if someone cuts you up though?”
We should look in the mirror. It’s all the evidence you need.

“But some pillock’s just cut you up. Why are you looking in the mirror?”
No, I’m not explaining it right.

Alright, I’ll get the dashcam camera, and have it pointing at me.
That’ll make my driving better.

The insurance company would hate that.

And maybe that's another reason we should do it.


Previous post...
My son doesn’t want to do anything. And I feel exactly the same way too. #DadDirt

All about me, and getting these by email.
Posted by Neil Mossey at 10:02