Getting rid of my dead Mum's clothes. #DadDirt 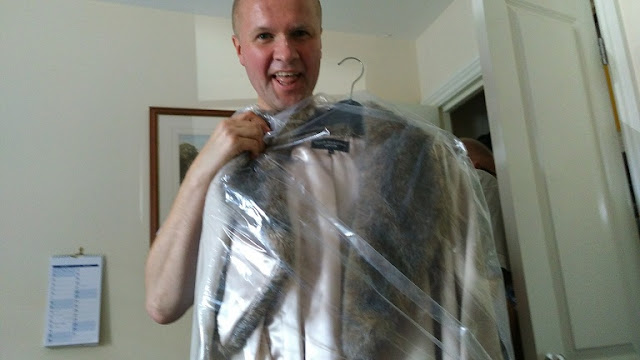 You know that you are a Great British Dad when...
...it's easier to clear someone else's house than your own.

Dad wondered if I could drop by to help him go through Mum's clothes, but I don't know what help I'm supposed to give.

I don't want to get rid of them any more than him, but it's not like it's helping having them around in the meantime either.
So they're still there. 3 years on.

Maybe I could take pictures of them.

I want to let them go.

But don't want to do it, like how I got Dad to let go of her manky dressing gowns.

Two of them - which were clean, but she'd lived in them for four years. With the fag burns from the weed that would help her MS. And the blobs of nail varnish from where she'd ironically want to look her best.
In her manky robe.
I feel bad that I encouraged Dad to let them go.

Why shouldn't we hold onto the stuff?

I remember the manky robes so clearly, that's probably the sign they're not needed now.

On her last weekend we went through a shoe audit.

Hours, going through piles of shoes, with someone who hadn't walked or worn them for years. My brain's telling me they're just objects, so why is it taking so long?

The kids are outside and it's sunny.
But neither of us wants to give them away.
I know what you're thinking.

But she was a hoarder.

And neither of us want to be.

So we're hiding behind her hoarding - for 3 years now - which ironically is exactly what she would have wanted.

I'll make a video of them.

And I want to make it a nice video, otherwise it's a waste of time and turning the actual hoarding into electronic hoarding.

I should put music on it.
I'd like to put music on it that she liked.
Like that John Barry score.
Or Bruce Springsteen.
But that's all copyright infringing.

I loved Mum. But not enough to get a YouTube copyright strike for her.
For a video that no one else is going to watch.

Maybe I could make it like one of the BAFTA "those we have lost" montages.

How to get rid of my Dead Mum's clothes, the VIDEO #DadDirt


Previous post...
Ideas to improve cupboards in our house for the 2020s #DadDirt

All about me, and getting these by email.
Posted by Neil Mossey at 10:06