Of course we're angry. It's all our fault. #DadDirt 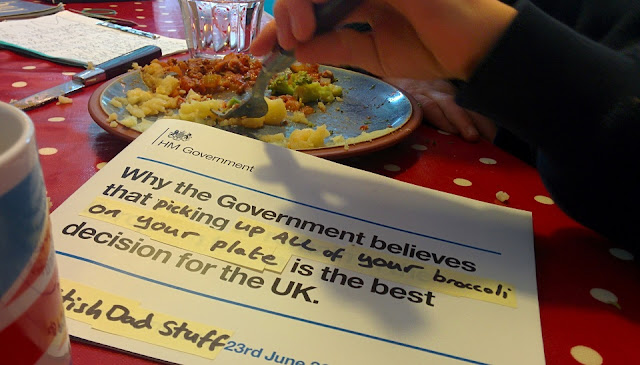 You know that you are a Great British Dad when...
you're really fed up with all the politics.

I’m walking across the town square and my way is half-blocked by a man with a table and rosette.

MAN IN ROSETTE
Excuse me sir, are you going to vote on Thursday?

ME
Thank you. I love that you care enough to even ask.
Your passion's really great. To be out here doing this.

You’ve chosen a side, and you want to make a change.
And try and help it win.
That's brilliant.

And we’ve already forgotten about all those really important battles and all that arguing the toss, from even 3 years ago.

Can you remember what we were arguing the toss about 3 years ago?
No, me neither.

But oh it was so important with those rentagobs and their soundbites.
And none of them, not one of them is around any more.

But no, this is really important now.
These rentagobs and These soundbites - they're the ones we’ve got to be obsessed about now?
Right.

Like it all comes from up above.
And we’ve got to listen to them.
And agree with them.
Or fight them.
Or “not let them get away with this one”.

And however urgent and important we try and tell ourselves it is this time - this is the one that counts - I know that my heart really isn't in it.
And it's great.
Because it's one big constant distraction.

And we’re angry.
We’re angry because it couldn’t be a bigger way of speaking to our failings.
To not be curious.

To look to some mythical hierarchy to look after us because we do not want to do the difficult work ourselves.

Because we're all too busy scrolling through our feeds, or watching TV, or doing another lap of Gran Tourismo 5 than actually doing hard work like looking after each other.

Look how self-righteous we get when something bad happens.

“Something needs to be done!”
Yeah!
By whom!
“Somebody else!”

It’s a crock.
It’s held up as really important and noble.
Damn right - it’s important, so we can bin off all the difficult stuff to someone else as a top down relationship.

To people obsessed with “winning” who do really horrible stuff to get to that position.

But they’re the ones we need to look to.
Because we then all get to moan when it’s not done right.

Who would want to do it right.
It’s hard.
That’s why we all hand it over to someone else for five years.

Even though we’re at this crossroads right now where everything has changed - in culture, products and relationships - the ones that matter - nothing else in our lives works like that any more.

I know that nothing will change because we want a system where I get to be distanced as far as possible from the difficult work of changing things for the better.

In a first past the post system that doesn’t even reflect our vote that we can’t be bothered to change.
Because that’s too hard.
But no, no, that one day is sacrosanct.

Choosing to cheer or boo between three or four storylined pro-wrestling characters.
I'm not so sure party politics is the same as Democracy.

We can’t even be bothered to devote more than a day to this deliberately defective process. As if we couldn’t stress any harder how Victorian it is, we 'suspend campaigning' to send someone to London in secret as an expression of shame. “At last. That’s over. I can moan for another 5 years now.”

So, as you can probably imagine, I’m having a tough time deciding whether I’m alright endorsing the system that always has been broken and always will be.

But man, what a beautiful distraction.
Neither of us getting a stroke of work done.
Let’s hope we can keep it going, eh?

MAN WITH ROSETTE
Do you want a leaflet?


Previous post...
Any excuse to get my family to be creative #DadDirt

All about me, and getting these by email.
Posted by Neil Mossey at 10:08