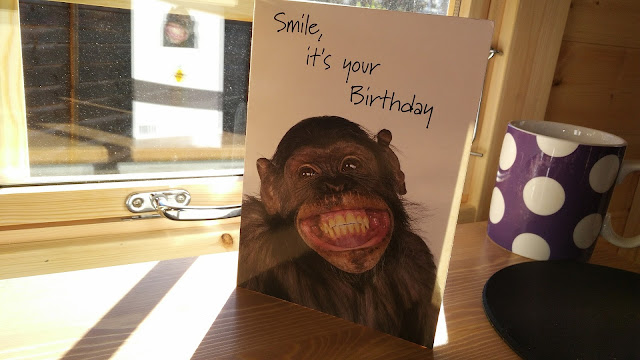 You know that you are a Great British Dad when...
...you realise you’re not exactly giving out awards to the people who deserve them.

My son's playground assistant gave him a birthday card.
And a sweetie.

And the words she wrote inside were meaningful.
They also cost actual money.
I can't imagine what her earnings are.
And it's part-time.

And yet here we are, obsessing about attention-seeking crazymakers who want the world to know that the world revolves around them.
That unique form of disagreeable Alpha.

And... did we just build a whole system - our whole society - around them to reward that?

What if we write about (and tweet and status update) the people we like in our lives?

That person who comes round to do cat sitting when you're away. The kind blood test nurse who distracts you when the needle is in.

The person on the other end of the tannoy, who lets you out the carpark for nothing because your ticket is bent.

The train guard who delays closing the doors for a moment because they see you running down the platform. The stranger who picks up your elderly relative because he's fallen over in the street.

The call centre worker who chuckles, momentarily forgetting about their time target now dropping like a stone because you can’t get some details in front of you.

The teacher who ignores the Department of Education performance figures to just take an extra day to go through something that won't be "on the test". The shop worker who lets you off because you're a few pence short - even though their manager wouldn't like that.

The guy at the tip who gives you a few rubble bags, against the cleaning multinational’s directives to run the place for profit.

Yeah.
All of those.

The ones we don’t “take to facebook” to sound off about.

All those heretics and acts of non-compliance in our lives.

But we choose to obsess over self-appointed attention-seekers in the news instead? That's okay.

But what if it's giving them exactly what they want, and means we forget and ignore the kind kind of people in our lives we should be calling out instead?

I know this is the wrong thing to say, because it invites risk... but what if we're not so helpless, and things aren't that bad.

What if that’s what we're really scared of.

Not starting those things within our control, so we can fret about everything else instead?

Previous post...
Data gathering by big companies will slander my Wife for having a pointy head #BritishDadStuff