ARE THOSE WIND CHIMES OURS? Why does it even matter? #DadDirt 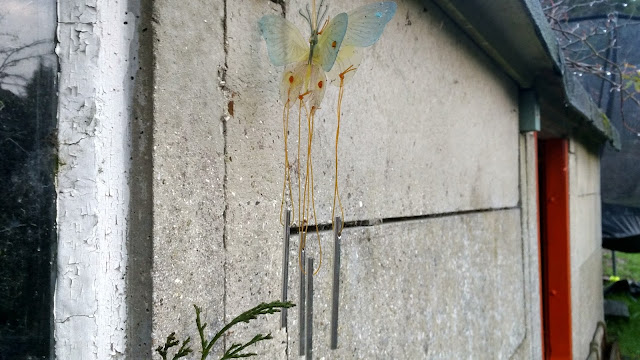 You know that you are a Great British Dad when...
...you don’t want to chuck out the same object if it wasn’t already here when you moved in.

We’ve got these wind chimes.

They are really ratty and past it, and now they’re on the floor, on our patio.
(Well, not now, I hung them up for the photo).

So here’s my chance.

I really hate them.
There aren’t many objects that get to me (here are all the other things I hate)
- but wind chimes are right up there.

They are not chimes.

They are just building their part.

They should be called wind random noise.


Why isn’t the breeze enough?

You know what that moment of nature doesn’t need right now?

A load of atonal metal clanging.


(It’s more “Art” that falls under the heading of “I could do that”.
With some forks in the dishwasher tray).

They’re also called dream catchers.
But I know some of the dreams that my family have had, and there is definitely nothing that should block them on their way.

But here’s the problem, I only want to throw them out when noone is looking... if they are an overhang from the last person who lived here.

I’m still chucking out all sorts of crap left by the previous owner, months after we moved in.

But if those wind chimes are “ours”, then for some reason it’s different.

Even the stuff I hate is difficult to bin.
Why do I care it’s “ours” from before?
Everything that’s here is “ours” now.


Previous post...
Why does something Peter out? Poor Peter. His name is a verb, and I know how he feels. #DadDirt