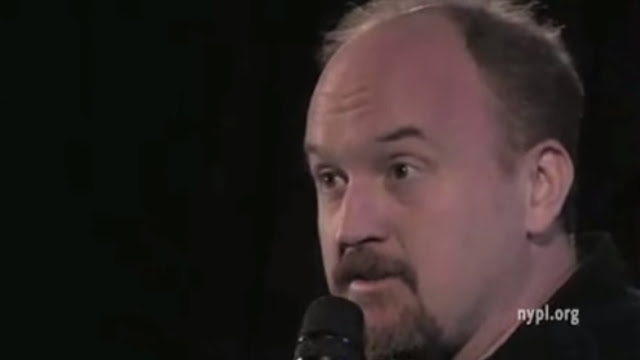 It's always difficult putting a post out on a Friday.

Nobody reads blogs during Friday daytime or nights.

But here we are.

So thought I'd add a few links to my writers' page of links on vulnerability.

The first is one of my favourite Louis CK videos - where he's speaking in tribute about another standup legend, George Carlin.

I'm not really up on his work - apart from being the time ship guy in Bill and Ted's Excellent Adventure (and thinking, wrongly, that he was the original teacher in that sitcom, Head of The Class...)

But to hear about what drives Louis CK, and what he feels his turnaround was is pretty special.

"I was doing the same hour of comedy for 15 years..."
"He just kept putting specials out every year... how do you do that?
I just chuck out the material and start again."

The other one I was put onto by a brilliant director mate - literally about vulnerability.
I first watched these videos the other way round, Brene Brown talks about what happened after the second video - it's the next link down, you'll get it...


The Power of Vulnerability | Brene Brown

Get these posts daily by email.
Posted by Neil Mossey at 23:01