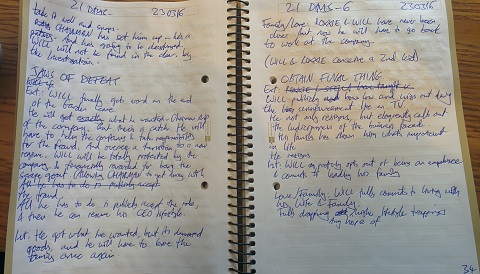 I want to use a husband wanting a wife's password as a story idea for a sitcom.

But it feels so good - that there's something in there with loads to explore - that I don't even want to mention it, in case it gets mentioned or worse used and done better somewhere else.
(if it hasn't already).

What it other art forms did that?

"I'm not going to paint that picture because someone might nick the idea and paint the same thing."
"I've got an idea for some glass I'm going to blow. But I'll hold back or just tell some close friends about it, in case it gets blown the same way by someone else - or worse - get lifted by some massive glass manufacturing company."

When David Croft had the idea for 'Allo 'Allo in his hands, that I'm sure I read in his dark autobiography "You Have Been Watching" that he thought it was so brilliant and likely to happen somewhere else, that he urged the Head of Comedy to make it as quickly as possible before ITV came up with the something similar.

I love that sense of urgency, because it's batshit insane.

Even before the negative checking that you're not doing it yourself.

The other funny thing with comedy writing is that despite having your antennae up for nickers - you know the obvious deep down - that best stuff is always the stuff that only you can tell.

God forbid that you and only you came up with those two things to put together, or that reversal, or exaggeration or sarcasm that absolutely no-one else has thunk up (or tweeted or status updated) before.

Because there's no way that anyone could've ever actually gone along the exact same train of thought before in the history of human thought.

Is what you think.

And maybe that's the only stuff worth going for, and the irony - nature's cruelty - is that you need to put as much of that kind of stuff out as freely as possible to get to come up with more of it.

On the upside, my glass blowing is a bunch of arse.

These posts also go out automatically by email, when you click here to subscribe - thanks for signing up...
Posted by Neil Mossey at 19:46