Choking on an apple. On a train and too embarrassed to say. 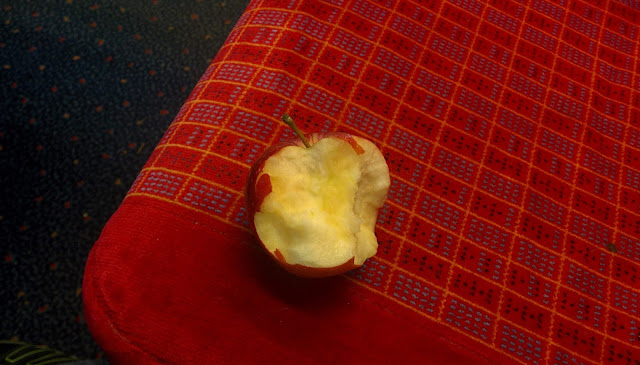 I was on the train and I swallowed a chunk of apple.
I breathed and the chunk flew in before I was ready.
It made me cough and I panicked.

What if it was stuck in my windpipe?

It didn't feel right, and I was coughing. 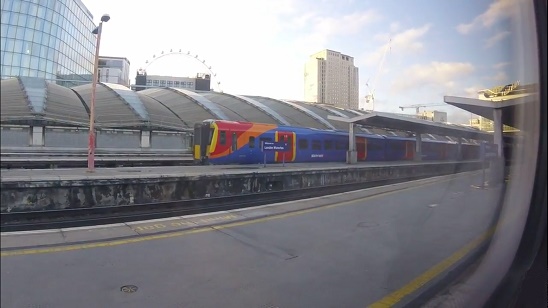 Except I was on a train ready to leave Waterloo.
I got onto the platform to try and cough it out.
It wouldn't budge and I could still feel it there.

I panicked some more.

Barmily, I did what anyone else would do - I went to my phone to Google it.

Even more barmily, if you type in the letters S-W-A-L-
"Swallowed chunk of apple" comes up instantly. 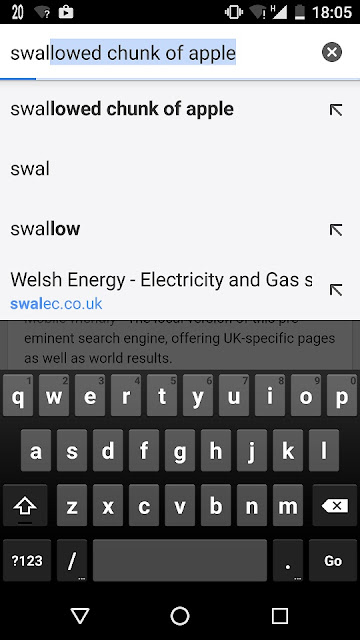 Either my phone could hear me coughing...
(like the voice search is triggered by "CHOKE-KAY GOOGLE!")
...or a lot of people were doing what I just did. 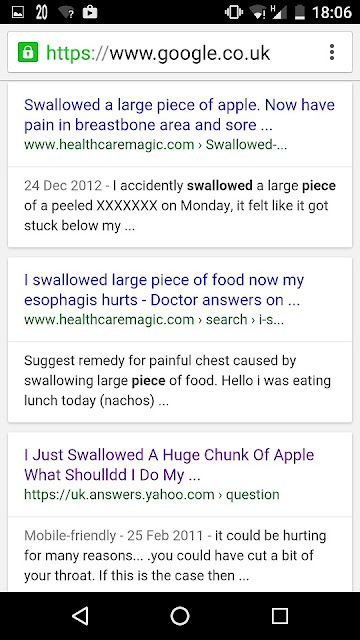 All the results are people on forums saying
"Help! I just swallowed a chunk of apple and I think I'm not breathing"
-- followed by a load of answers saying
"You're fine."
"I did that too once, really you're okay."
and
"There is no absolutely no way that a chunk of food can get itself into into your airway."

But that didn't help, because mine definitely feels like it's in the wrong place.

So I went to the toilet and tried sicking it up.
Now all the rest of the apple flies out except the chunk.
The chunk that might be slowly killing me.

I've got to pull the rip-cord and do what no-one does on the train at Waterloo.

"Excuse me." I croaked to the lone commuter sat waiting for the train to leave too.
"I'm really sorry but I just swallowed a big bit of apple and I think it went down the wrong way."

He held up his can of lager, ready for what I was going to say next:
"I don't s'pose you could hit me as hard as possible to try and get it out?"
He put his can of lager down.

I asked him to hit me repeatedly... "And don't hold back."

He didn't hold back.
And it didn't budge.
And then I had to sit next to him awkwardly.
For the rest of the journey as far as Woking.

If you're into that kind of thing, it is way easier to get than I thought it was.
But I'm not.
And I am still alive.

So if you are Googling "Swallowed chunk of apple" and this post comes up.
You'll be fine.

Understanding Your British Dad. My guide is here

Thanks for subscribing by email, helps me keep this blog going...
Posted by Neil Mossey at 21:15