I've been doing my Morning Pages all wrong. For six years. #ScriptChat 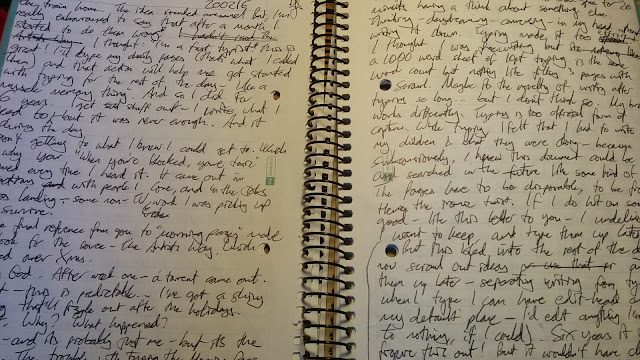 Following on from yesterday's post about The Artists Way by Julia Cameron...
I had been doing morning pages since around 2009. I was a speaker at a conference, and one of the other speakers told me about them on the train home. The idea sounded awesome! But, I'm really embarrassed that after a month I started doing them all wrong.

I thought: "I'm a fast typist - this is great!
I'll type my daily pages (that's what I called them) and that action will help me get started with typing for the rest of the day - like a muscle-memory thing."
And so I did.
For 6 years.

I get stuff out - I write what I need to during the day - but it was never enough. And it wasn't getting to what I knew I could get to. Which is why Brian Koppelman's repeated phrase: "When you're blocked, you're toxic" chimed every time I heard it.

So I finally went to the source

and after week one - a torrent came out.

I thought - this is predictable... I've got a shiny new thing that'll fizzle out after the holidays.
It didn't.
Why? What happened?

It's dumb and it's probably just me - but it's the handwriting.
The trouble with typing the Morning Pages - for me - was that because I type so fast, I get a thought out, and then stare into mid-space for 20 minutes having a think about something else.

Thinking - daydreaming - conversing in my head - without writing it down.
Typing made it too efficient.
I thought I was freewriting, but a 1000 word sheet of 10pt typing is the same word count, but nothing like filling 3 pages with scrawl.

Maybe it's the novelty of writing after typing so long... but I don't think so.

My brain works differently.
Typing is too official form of capture.
While typing, I knew this document could be saved and searched in the future, like some kind of diary.

The Pages have to be disposible, to be freewriting. Here's the ironic twist. If I do hit on something good - like this - I underline the bits I want to keep, and type them up later.

But this bled into the rest of the day - I could now scrawl out ideas and type them up later - separating writing from typing - when I type I can have edit-head on (which is my default place - I'd edit anything I've got down to nothing, if I could).
Six years it took me to figure this out!

The handwritten freewriting is generating 10x more than typing. Because I know they are disposable, I come up with way more stuff that I want to keep.

If you've made it this far into the post, there's so much more I want to tell you - like it's lead to stripping away the nice (Uniball 1.0mm gel impact) pen to black clear barrel Bic biros... Filling pages in my notebook in a continuous linear way (instead of different sections for "to do lists", "script", "work" and "raw ideas"). It's all a continuous stream now - new handwritten page at a time.

It wouldn't have clicked without "When you're blocked, you're toxic" and the "Morning Pages".

Added this to my page of everything that I know about How to write story.

Get these posts daily by email - click here to give me your email address for as long as you'd like...
Posted by Neil Mossey at 22:58