This is the one place I'll put blog posts and articles I like...

...So I've got somewhere to find them again. 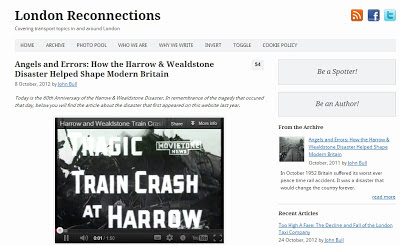 "In October 1952 Britain suffered its worst ever peace time rail accident. It was a disaster that would change the country forever."

- Basically, "triage" was brought to disasters in the UK by accident, because a US army base medical team was nearby by chance...


Naturally every page is soaked in this vile trite bilge. (Notably though, for an ex pirate radio DJ and BBC pop picker throughout the most tumultuous times in youth culture not a single mention of any meetings with pop stars at all) However it is in his love life that we are given the most pause.

"I arrived (at her parents) at 7pm and was greeted at the door by what I can only describe as a 13 year old apparition! She was simply stunning." (P147)

"…(the following year, so 14 now) I travelled to Italy to see her. I had just split from Eve Graham of The New Seekers and so, as the song goes, I was "Free Again"! P153 He marries the poor girl when she is 17. Elsewhere - 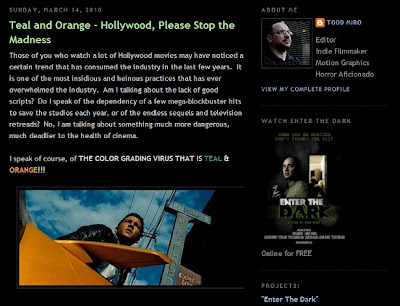 Having read this post by Todd Miro, I can't stop spotting this in film and TV drama... to paraphrase:

"Those of you who watch a lot of Hollywood movies may have noticed a certain trend that has consumed the industry in the last few years. It is one of the most insidious and heinous practices that has ever overwhelmed the industry.

I speak of course, of THE COLOR GRADING VIRUS THAT IS TEAL & ORANGE!!!"

He explains it, in full, brilliantly here
http://theabyssgazes.blogspot.co.uk/2010/03/teal-and-orange-hollywood-please-stop.html

There's even a Part 2 here
http://theabyssgazes.blogspot.co.uk/2010/03/teal-and-orange-part-2.html

It's everywhere - checkout the redheads in the icy blue cold outdoors


Are you the office martyr? 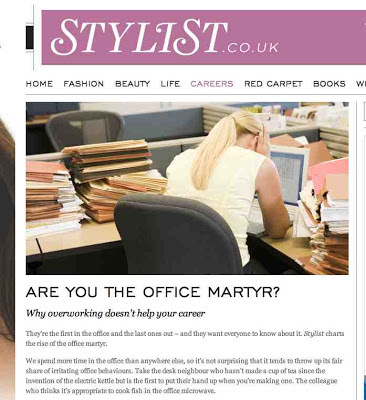 ...few things have the ability to grate quite like the 3am email from a co-worker, cc-ing in everyone but the cleaner, which on the surface reads like a friendly update but which we all know has the not-so-hidden message, “Just wanted to let you know that while you were snuggled up in your goose-down duvet, I was at work.” It tends to come from the same person who refuses help, thinks delegation is a dirty word and can’t possibly take a holiday in case it pushes the company into liquidation. It’s the office martyr.

Click here for all my favorite free stuff on the web...

Here's why I'm doing all this, and how to follow me


NEXT: A Great Disruption - social media that has a disproportionate response --->
HOME
<--- PREVIOUS: No Mummy after 7pm - DAD LESSONS FOR MY KIDS