Waited to do this one till we actually got to while Le Tour De France is here.

I'm not into sport, but can't look away from this every year..

Travelling over hundreds of kilometres in a day, cutting between 5 handheld cameras on the back of motocycles, a couple of helicopters and a few dull conventional landlocked ones at the finish.


Don't know if the links here will still work because the rights holders rightly extinguish fans sharing clips and, you know, promoting the whole thing through crowd-pleasing selection.

(Good luck with that.)

Stumbled on it almost by accident on my cable box in the 90s, and ended up watching commentating legend David Duffield talking non-stop for five hours. It was compelling. Some say, waffle and nonsense, but for me that was the draw.
Like one man versus infinite airtime.


Bizarrely, think these are both from the same year...


Burghardt - Watch out a dog


...apparently both dogs were okay.

More than can be said for these Farmers... who tried to protest by blocking the race in 1984.


The rest of the year is barren, sport-wise. This should hit to spot. 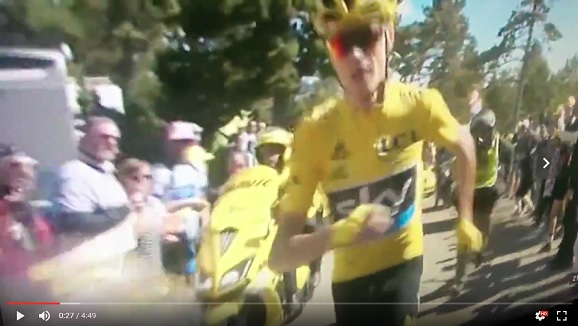 Seeing the Tour De France Yellow Jersey, Chris Froome, running up Mont Ventoux after his bike crash near the finish was pretty special.

But heard this a few days later from his team's General Manager Dave Brailsford.

It's a great quote about dealing with knocks in life: dealing with "what is" instead of how you want it to be.
(Guess you could call it good Sky-chology).


"...The difference between emotion and logical thinking and how you manage these types of situations.

And what we know is the goalposts move.
And people get upset.

"Oh the goalposts have moved"
and they get emotionally upset about why it moved and how it moved, and "It's not fair" etc etc.

What we've done over the years is trained ourselves time and again to recognise
"It's not if the goalposts move" - the goalposts will move.

And when they do move,
be the first to react to it in a logical way.

(I added that last bit)

#15 Ron Swanson from Parks and Recreation -->


Next: My favourite 10 bits of social media that get a disproportionate response --->
HOME
<--- Previous: How I got my first job